Round 5 of the Crazyhouse World Championship

For those players who had won four straight games, round 5 was the final hurdle in order to secure a place in the Candidates with the loser of round 5 still having a second shot in a final elimination bracket match. For those who had lost earlier in the tournament, they had had to win two games per round in order to progress.

Instead of embedding puzzles as in previous recap threads, I invite the reader to try to find the winning moves in a “practice against the computer” study.

NM blitzbullet won 6-3 against IM gsvc to be the first player into the Candidates. Particularly impressive was game 5 in which blitzbullet sacrificed his queen for a piece and a pawn to launch a successful attack via h6. In another game, however, there was a key intermediate move he missed which would have enabled the bishop on g7 to be taken in such a way that it would be too dangerous for Black to recapture. 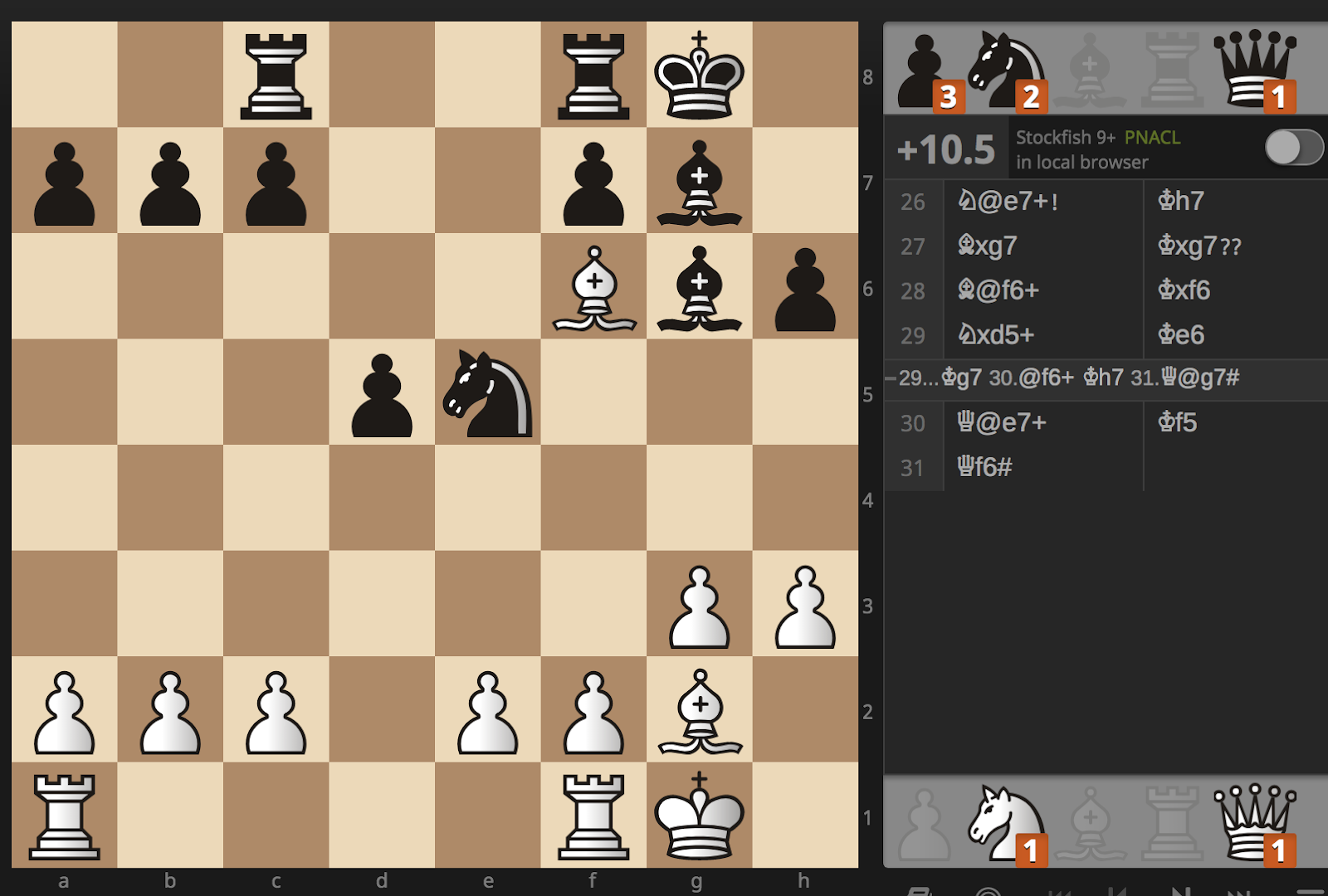 In another very instructive position, gsvc defended the knight on e5 with a pawn, but can you see why the pawn cannot recapture on e5? 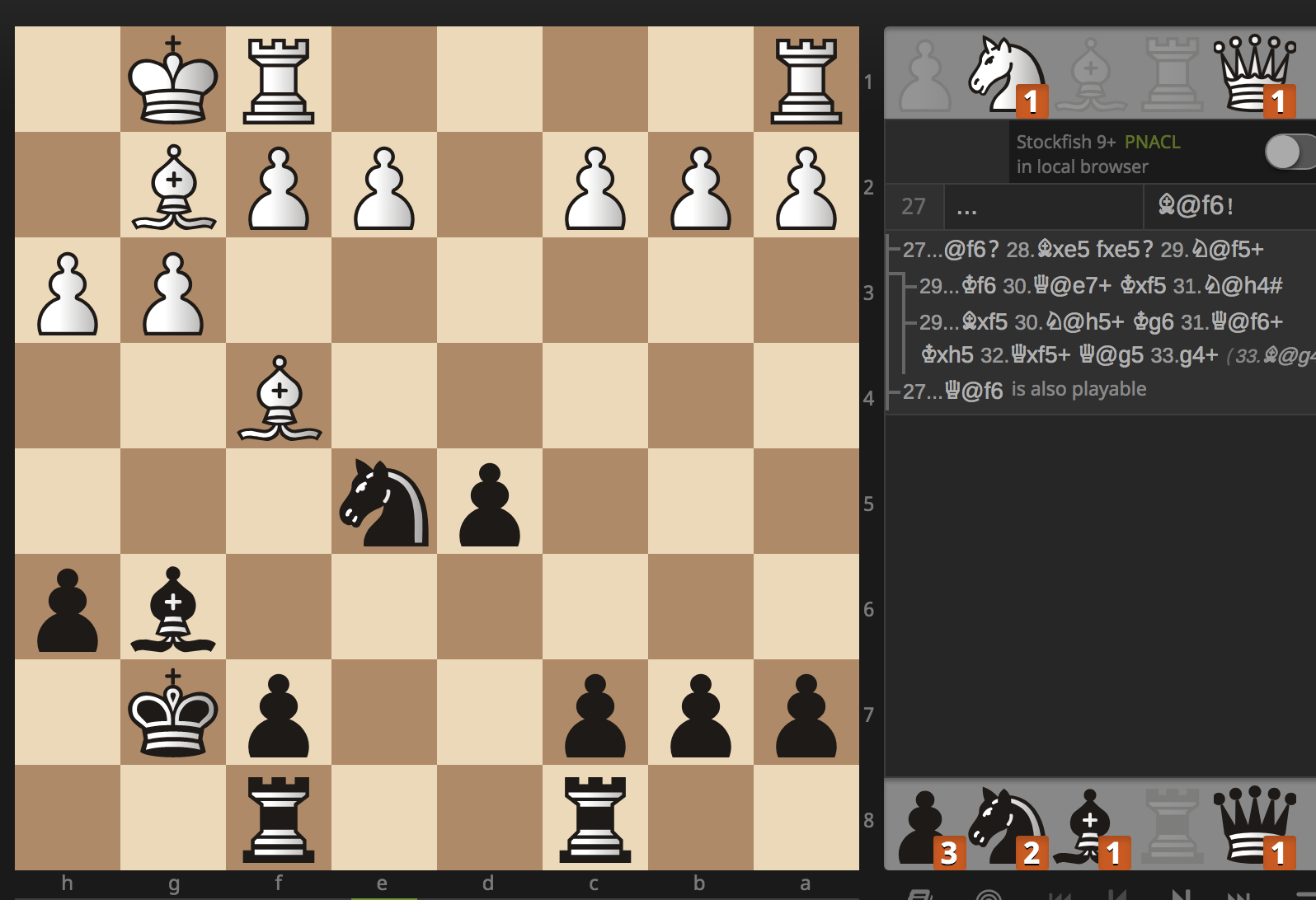 Blitzbullet duly converted. If gsvc had defended with a bishop however, then the bishop taking on e5 would still have guarded f6. IM gsvc would live to fight another day in the elimination bracket.

The elimination of Andrew Tang

The American GM penguingim1 famed for his prowess at hyper and bullet chess had previously suffered a surprise loss to FM amaidel from Russia in Round 3. He got his campaign back on track with a 7-3 win against the strong Swedish bughouse player pknm and 6-4 against the Atomic World Champion GM Arka50 from Switzerland. But he was dismantled 6-0 in some sharp games with the Australian crazyhouse specialist Mugwort. This was live streamed on my Twitch, and Mugwort also gave his own post-match commentary. In game 3, Mugwort in fact missed mate by promoting to queen on f1 in the following position, in so doing leaving penguingim1 with a mating opportunity which he missed.

In the end, Mugwort himself lost 1-6 to IM gsvc in a Candidates decider, which meant that the Paraguayan International Master joined blitzbullet as a Candidate.

Another fascinating encounter was between mastertan and GM FeegLood. The crazyhouse specialist from Australia beat the grandmaster 6-4 (see in particular game 4) after which FeegLood withdrew, which meant xuanet advanced from the elimination bracket unopposed after a 6-3 win against burpcow and a 6-4 win against garnek123.

The withdrawal of allyouneedisluft left littleplotkin without a Round 5 opponent and so a place in the Candidates. (littleplotkin had in fact earlier faced HighContrast in Round 5, but the latter was eliminated on suspicions of external assistance. For an instructive take on this sad affair, you can play Spot the Move on some of the positions which one might speculate could have raised suspicions.)

Finally, the withdrawal of IM larso as well as allyouneedisluft paved the way for Kleerkast (the conqueror of ciw) to become a Candidate if he could overcome terra87 (who beat FM amaidel). He prevailed 5.5-2.5 to book his place. One game was particularly sharp. Kleerkast missed a difficult mate, but with his king being hunted, terra87 stepped the wrong way. Kb6! was safe, but Kd6 ran into mate and Kleerkast duly converted. 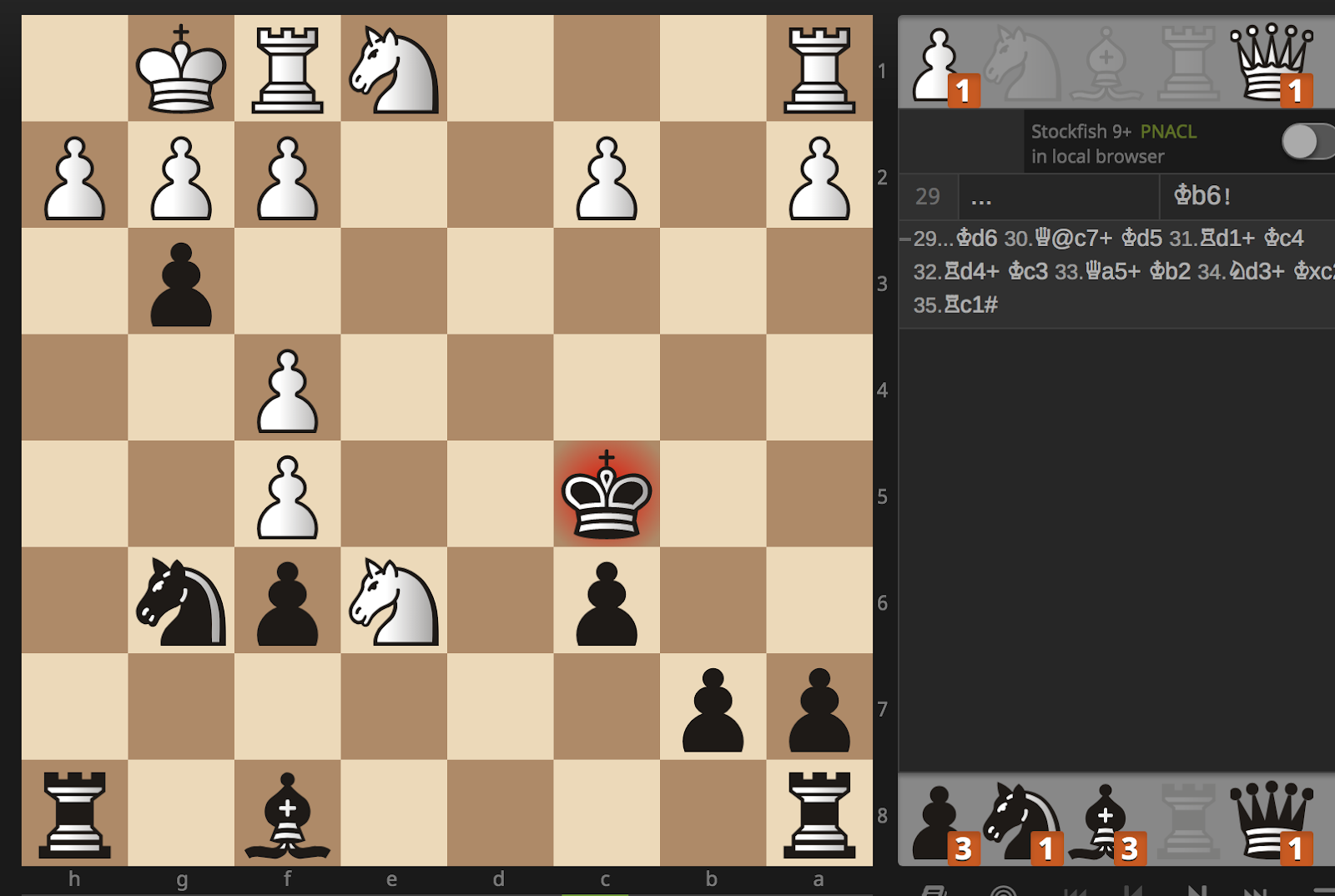 The fourth undefeated Candidate in round 5 was sexy_and_I_know_it who beat Vempele 6-4. Meanwhile, Fumitoks who lost to blitzbullet bounced back with an 8-2 win against crosky, a 6-4 win against the very strong profz, 8-2 against TCubes and a brilliantly played 8-2 win against ArtofDeception who had previously overcome retardedplatypus123.

Vempele ended up losing 2-6 to Fumitoks. Game 5 was particularly memorable. Although there were certainly faster mates, Fumitoks chose to play it safe and only sacrificed the queen for the mating attack when he saw for sure that it was working.

Vempele, the master theoretician, was humbled and closed all his lichess accounts including his duplicates. We hope he returns. Fumitoks, for unrelated reasons, subsequently chose to withdraw from the Candidates Tournament insisting there should be 10 Candidates as originally stipulated and disrespecting the inclusion of JKtheBullfrog as a second wildcard by FischyVishy. JKtheBullfrog had been included by the tournament director as a wildcard replacement after IM opperwezen withdrew citing lack of motivation to play this year. But with the help of cajoling from World Champion JannLee, LegionDestroyer and opperwezen’s many fans, he agreed to re-join. This led to two wildcards and strictly speaking a change to the original format. Needless to say, there was overwhelming public support in the crazyhouse community for all 11 Candidates to play. To encourage this and as a show of appreciation for the Candidates, JannLee has set up a crowdfund, so every Candidate who completes all their matches will receive their share of the pot.

At the beginning of the blog, I shared a puzzles study link . The solutions to these puzzles and how they played out may be found here.

The Candidates tournament is now underway with the 7 remaining Candidates who qualified alongside NM TwelveTeen, IM opperwezen and JKtheBullfrog. The calendar of upcoming matches may also be seen on the right. Thanks to LegionDestroyer & MessyAnswer for setting up a spreadsheet where we can now easily see the latest standings which I am keeping updated.

Finally, all 22 of the CWC Candidates Matches played so far have been live streamed on Twitch and uploaded to YouTube. See here for the full playlist of commentaries on the 2018 CWC (most recent first). Please do subscribe on YouTube and Twitch to all the streamers involved.

Season 8 of the ZH League

Season 8 of the crazyhouse team league played on lichess.org was the toughest ever with former and current world champions JannLee and IM ...