Preview of Round 3 of the Crazyhouse World Championship

Round 3 of the Crazyhouse World Championship is underway all over the world as crazyhouse enthusiasts go head to head in a bid to reach the Candidates Round which will choose the challenger to face JannLee in a final which will be held live later this year in Sidney, Australia!

There will be plenty of strong matches in the elimination round also. Check out the draw for the full list of matches to be played. Players report  the time they have scheduled to the relevant thread on the CWC team page so that it can be added to the calendar. To see the full calendar of upcoming matches click here.

Notice also this Friday, in an event organised by opperwezen, the two titans of the game JannLee and TwelveTeen will go head-to-head in their first ever ZH960 match with a 3+5 time control on the chess variants website, which incidentally is also a great home for ZH puzzles.

See you next time for the recap and analysis of round 3! In the meantime, do join the Discord and check out the previous blogs on zhchess.blogspot.com if you haven't already seen them.

Email ThisBlogThis!Share to TwitterShare to FacebookShare to Pinterest
Labels: cwc

Round 2 Recap of the Crazyhouse World Championship

Round 2 of the double-elimination Crazyhouse World Championship saw the field of 128 contesting for a place in the Crazyhouse Candidates reduced to 96 with decent players such as FM Simba7, isaacly, medved9112, Yery, Andrey2888 and yours truly okei eliminated in the face of stronger opposition. At the other end of the spectrum, all the top seeds such as allyouneedisluft, gnejs, Mugwort, blitzbullet and GM penguingim1 won their games comfortably. However, the Canadian bughouse star and popular streamer helmsknight unfortunately decided to withdraw because of a confluence of too many upcoming commitments.

The biggest upset of the round seeding-wise was between the two crazyhouse specialists crosky (#27) and ciw (#38). It came as no surprise that ciw out-performed his rating, which made for a thrilling contest. ciw won five games in a row to bounce back from an early deficit to win 7-3. Can you see the mate in 2 in the following position? It concluded a mate in 5 combination from ciw, kicking off his revival.

The game of the round was a 93-move epic from the same match which crosky won, about which more later! Another tight contest was between atamek (#19) and FM MagicAndy (#46) which atamek won 6-3. Can you see the neat mate atamek found here? 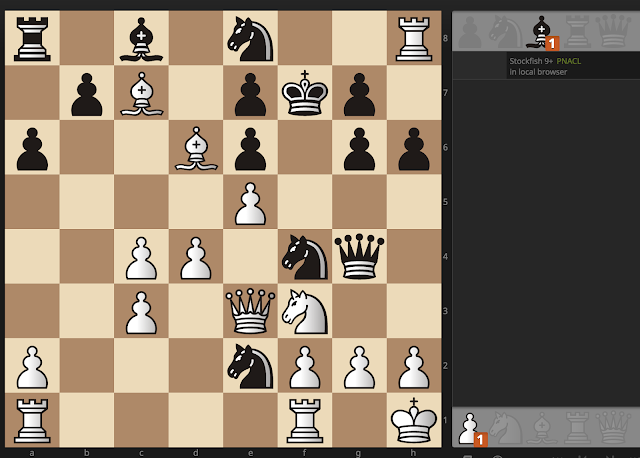 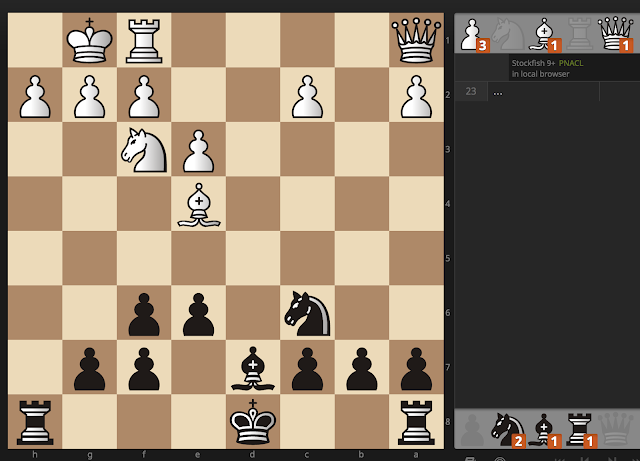 However, terra87 continued to impress, winning 7-5 in extra-time. See if you can find the pretty mate terra87 found here: 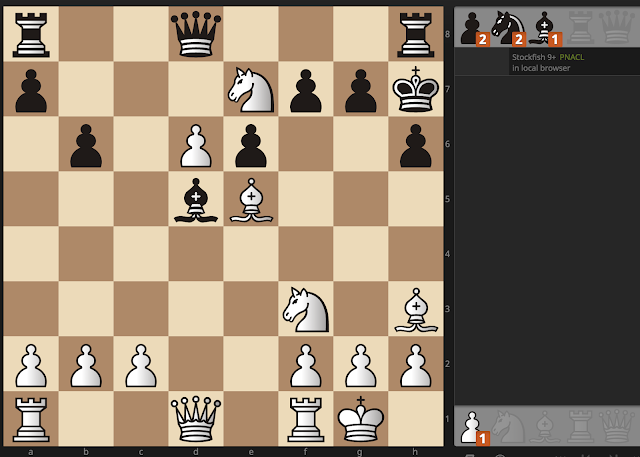 Another tense contest was between Norwegian IM larso (#32) who bounced back from opening disadvantages as well as a 0-2 match deficit to suffocate the crazyhouse master mathace (#33). In game 1, larso thought he was going for a safe draw by repeating the position instead of trying for a possible mate, only to discover that according to ZH rules implemented correctly on lichess (unlike on FICS), not only the position but also the pieces in hand must repeat in order to create a repetition. The following bizarre move sequence followed. Note the mate in 10 beginning with 41. N@e7! which larso considered but didn't go for, opting for what he thought was the “safer option”.


In many of the games mathace had promising positions out of the opening, the epitomy of which was game 8 in which he had initiative and even a complex mate in 12 combination. But mathace lost control of the kingside by allowing 21. Q@g4 and then hung a mate himself, which larso duly found. Can you see it? 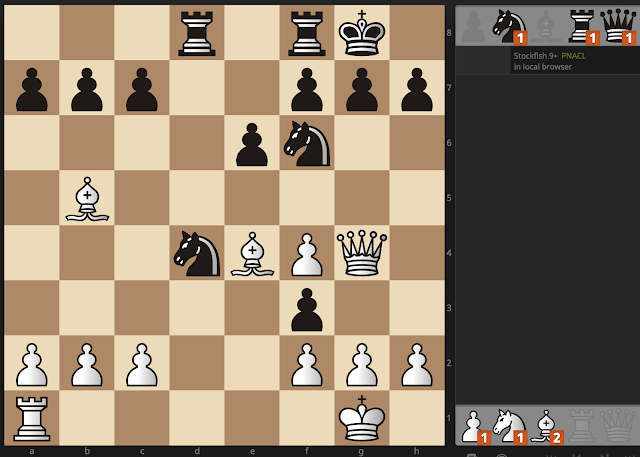 I found a similar mate in my own match against IgorBugMate (#85), despite losing overall 8-2:

Another much-anticipated match which lived up to expectations was between Alexnader123 against the crazyhouse theoretical maestro Vempele (#9) hailing from Finland. Despite some inspired play from Alexnader123, Vempele’s experience proved too much and he took the match 7-3. In this critical position, Alexnader123 took the wrong piece with his queen. Can you see which capture would unlock the white king? 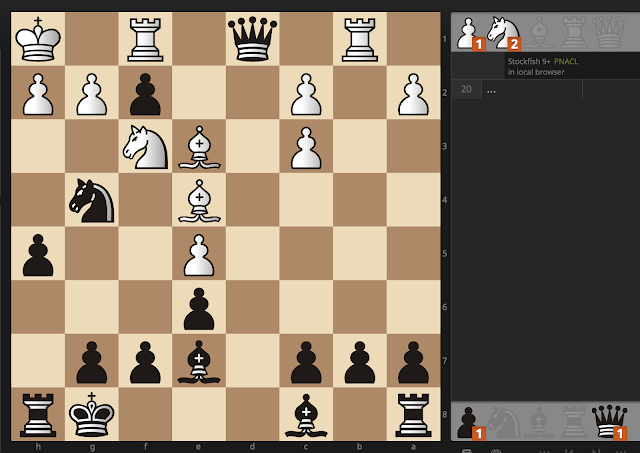 Vempele held his position together and bounced back with a mating counter-attack:

The closest thing to an upset came from KyleLegion (#58) who put littleplotkin (#7) down 1-3 before in the end losing 6-4. He opened up with some good opening preparation converting the first two games almost flawlessly:


littleplotkin found a pretty mate himself in the following position, and surged into an unassailable 6-3 lead.

But KyleLegion had the last word if not the result he desired winning this particularly sharp tenth game in which he hung a potential mate in 12 which littleplotkin missed and then himself converted perfectly a mate in 8:

There were less struggles for the other top seeds. Penguingim1 (#8) played almost flawlessly to defeat the strong recastrov (#57), including finding this pretty mate:

At 0-5 down, recastrov did however have a missed mating chance. Find it! 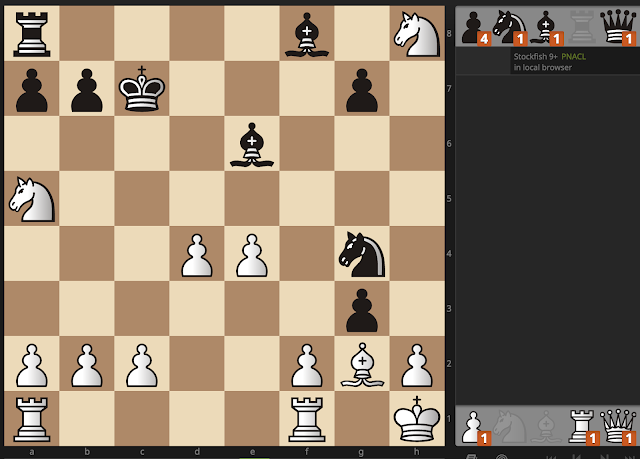 Blitzbullet (#5) had a shaky start against TheLAZYmd (#60), founder of the Chess Variants House Discord server. All crazyhouse enthusiasts should join for live CWC chat among fans during games as well as discussions about chess variants more generally. In time trouble, theLazyMD settled for a perpetual, but in your own sweet time, can you see the mate? 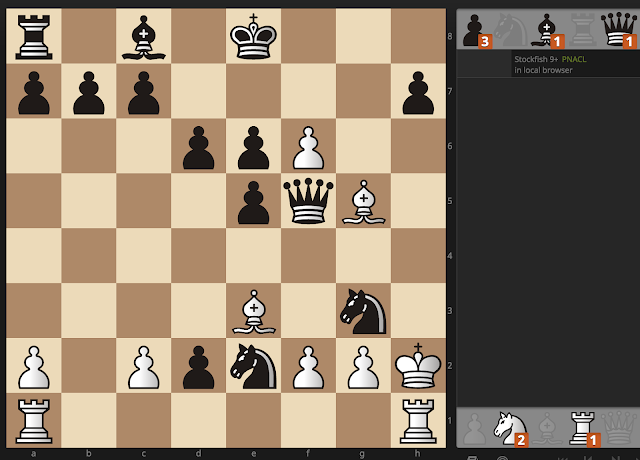 TheLAZYmd also missed a complex mating opportunity in a later game, instead playing 18. Qxf7 to reach the position below. Can you see the return mate which blitzbullet (and opperwezen in the live chat) found? 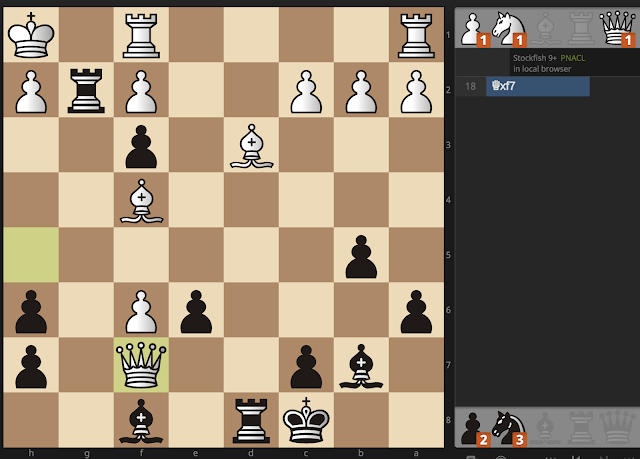 VariantsOnly (#54) is a talented young international master, but Mugwort (#11) proved too strong and VariantsOnly too queen-greedy. After VariantsOnly took 27. NxQ below, can you see the minor-piece mate that Mugwort duly executed? 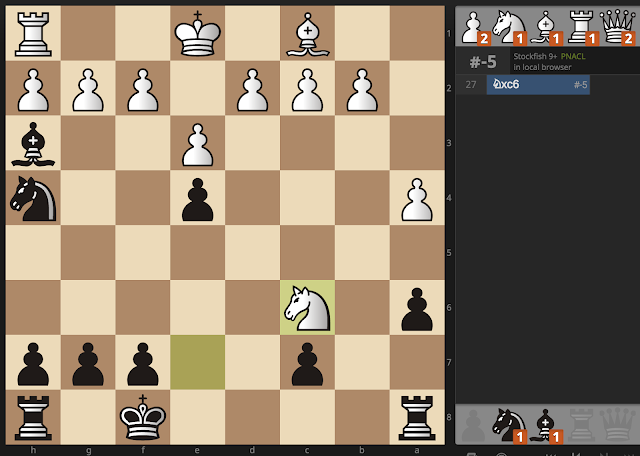 pknm (#24) also proved too strong for burpcow (#41) and was likewise adept at minor piece mating attacks. As black in the following position, he tricked burpcow with 16. … @g6. After 17. Ke2, white is probably better, but the pawn is poisoned if you take it (as burpcow did and soon regretted):

pknm also found a sweet mate in 5 in this position:

Karagialis put up a good fight against sexy_and_I_know_it, taking advantage of short coffee breaks which are allowed every two games according to the CWC rules. sexy_and_I_know_it proved too strong winning 8-2, but Karagialis found consolation in calculating a beautiful mate in 11:

As black, Karagialis had a curious drawing opportunity in one game which Stockfish discovered. With human play however, White’s position quickly became dominating.

CrazyHome (#77) from India was swept away 10-0 by IM gsvc (#13), but this misrepresents the quality and closeness of their games. CrazyHome missed a beautiful mating idea here. Can you see it? 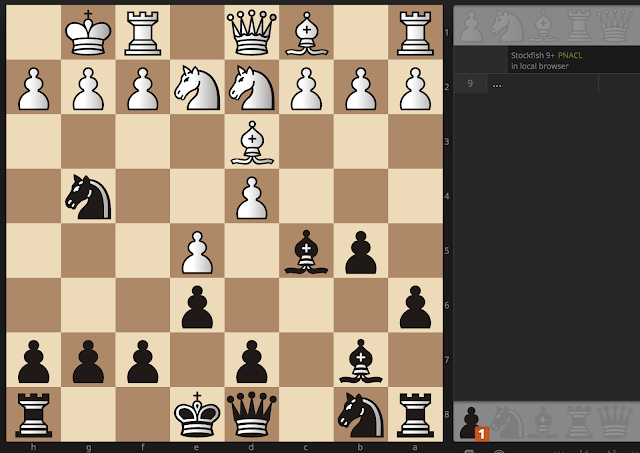 Another fascinating game was the following in which CrazyHome set up a scintillating attack with knights on h8 and g8. IM gsvc stepped the wrong way with his king, but CrazyHome missed the mate in 1 finish on move 19 and ended up losing.

profz (#21) proved too strong for gekkokamen (#44) winning 8-2. The Columbian gekkokamen did however find a beautiful mate after profz stepped the wrong way with his king. After 41. Kf3, can you calculate the finish for black? 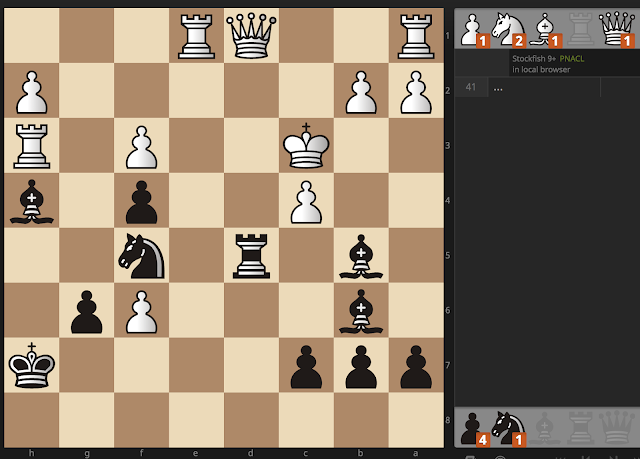 Finally, back to ciw - crosky. This was the 93-move epic which crosky won. Although it wasn’t enough to win their match, it wins game of the round!

See you next week for Round 3. We are also looking forward to a zh960 match between Champion JannLee and last year’s runner-up TwelveTeen on Friday 27th April at 8pm GMT  (details in the calendar) which will be streamed on Twitch as well as posted afterwards to JannLee’s YouTube channel. In the meantime, join the Discord server and keep following and playing crazyhouse!

Puzzle Answers: If you are stuck on any of the puzzles above, check out the CWC Round 2 study on lichess which will also be updated with annotations of some of the games included.