The inaugural 1+0 Crazyhouse World Championship organised by littleplotkin got underway in April 2019. After three knockout rounds (each match best of 20 games), the eight survivors are now playing an all-versus-all round-robin Candidates tournament (each match a full 30 games). The two players with the greatest aggregate game points will face off in a 100-game Final to be scheduled over three or four sessions.

All updates, scheduling & results are being reported in the 1+0 CWC thread on lichess, but you can also see match times in the Crazyhouse Calendar embedded in the right-hand column of this blog, and many of the matches are being streamed by JannLee, Kleerkast, Fumitoks and others, and you can catch up on the recordings on their respective Twitch channels or on the 2019 1+0 CWC playlist on YouTube.

Most of the early matches were quite one-sided as the stronger seeds easily prevailed. A big round one upset was KyleLegion succumbing to SwiftDevil 13-7 after losing the first ten games before getting his crazyhouse shoes back on and taking 7 of the next 10. I hit a new peak rating above 2250 in losing my own match to LeProfessionnel 13.5-6.5. Round 2 saw a few more closer matches with Fumitoks beating emrty 12.5-7.5 after emrty came back from 0-9 down, penguingim1 beating TCubesAK 13-7, retardedplatypus123 beating chewythechewer 12-8, Kingswitcher getting past B0N0B0 on tiebreaks winning the last four games to win 12-10 and closest of all garnek123 beating mathace 11-9. In round 3, the three most exciting matches were mastertan with some powerful play to see off a challenge from retardedplatypus123 12-10 on tiebreaks, VariantsOnly edging ahead of xuanet 11-9 to create the upset of the round and littleplotkin surviving through the time scrambles to beat garnek123 11-9. The two dominant performances were from JannLee beating pknm 18-2 and opperwezen beating JohnStuckey by the same score. Meanwhile, penguingim beat Kingswitcher 11-8 over two sessions, blitzbullet pulled ahead of Kleerkast 11-6 with aggression and speed winning the day, and chickencrossroad sent a warning to the big two with a 15-5 demolition of Fumitoks who just the previous week had berserk-beaten JannLee in a 3+2 Elite Arena.

So the eight Candidates who will do battle for the 1+0 CWC crown are JannLee, opperwezen, chickencrossroad, littleplotkin, blitzbullet, mastertan, the grandmaster penguingim1 and the hopefully soon-to-be-grandmaster VariantsOnly. The match times will be posted up on the 1+0 CWC thread, updated in the Calendar and you can watch the games live either on the lichess tv of the respective players, or on the live streams from JannLee and others. Results will be updated in the Candidates cross-table. Jann is also crowd-funding prize money for the eight Candidates to supplement the $500 prize for the two Finalists (split 3-2), half of which was set aside by littleplotkin and matched by the Crazyhouse Fund managed by JannLee from prize money returned by 2018 winners and donations for the benefit of future events.

Below are sixty puzzles taken from positions played so far in the competition. They are grouped loosely by theme. Check out the associated solution study to see the matches they came from, the full variations and the themes they represent. Or you may prefer to watch them solved live on my stream in this instructive video on Basic Crazyhouse Ideas: Puzzles from the 2019 1+0 CWC (video embedded at the end of this blog). 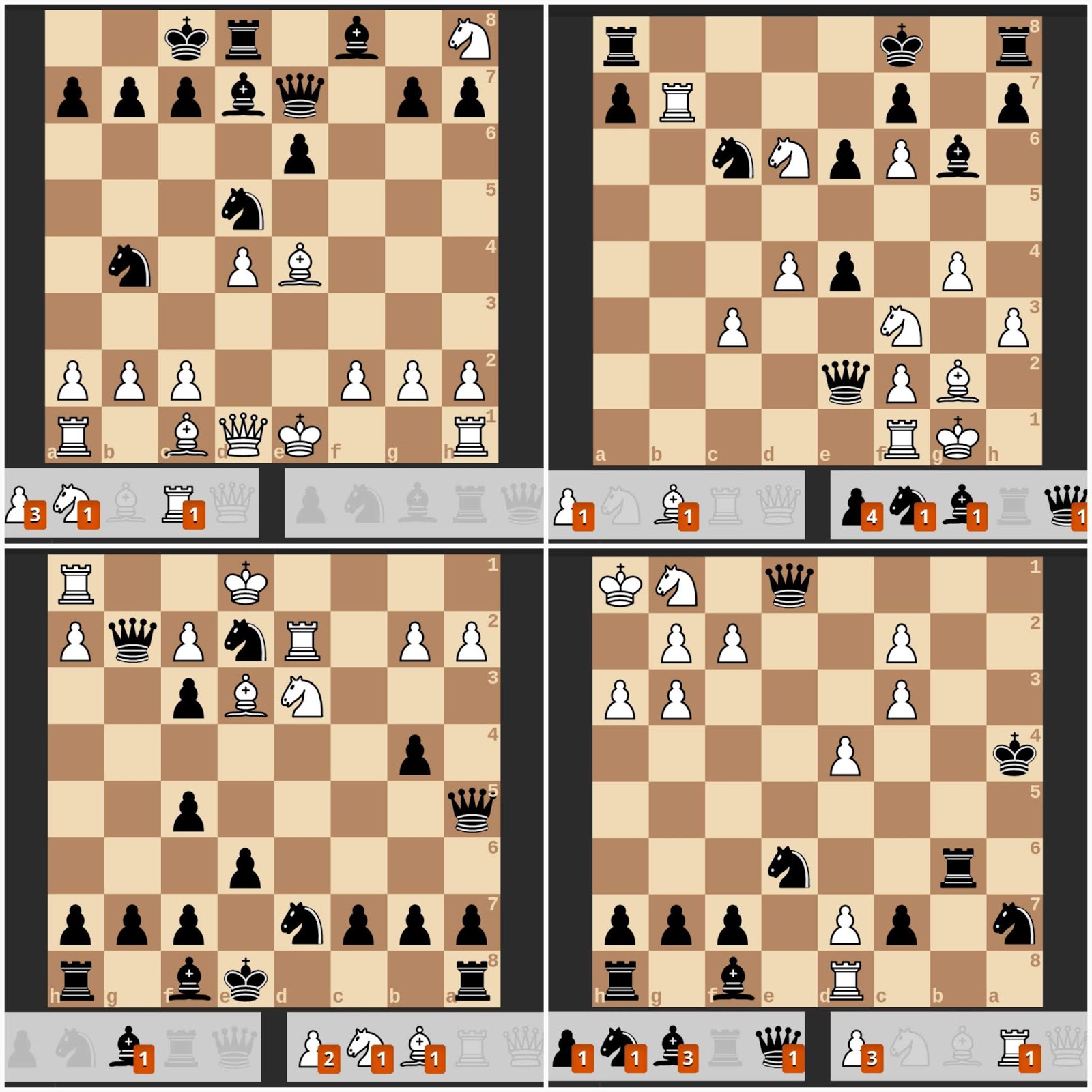 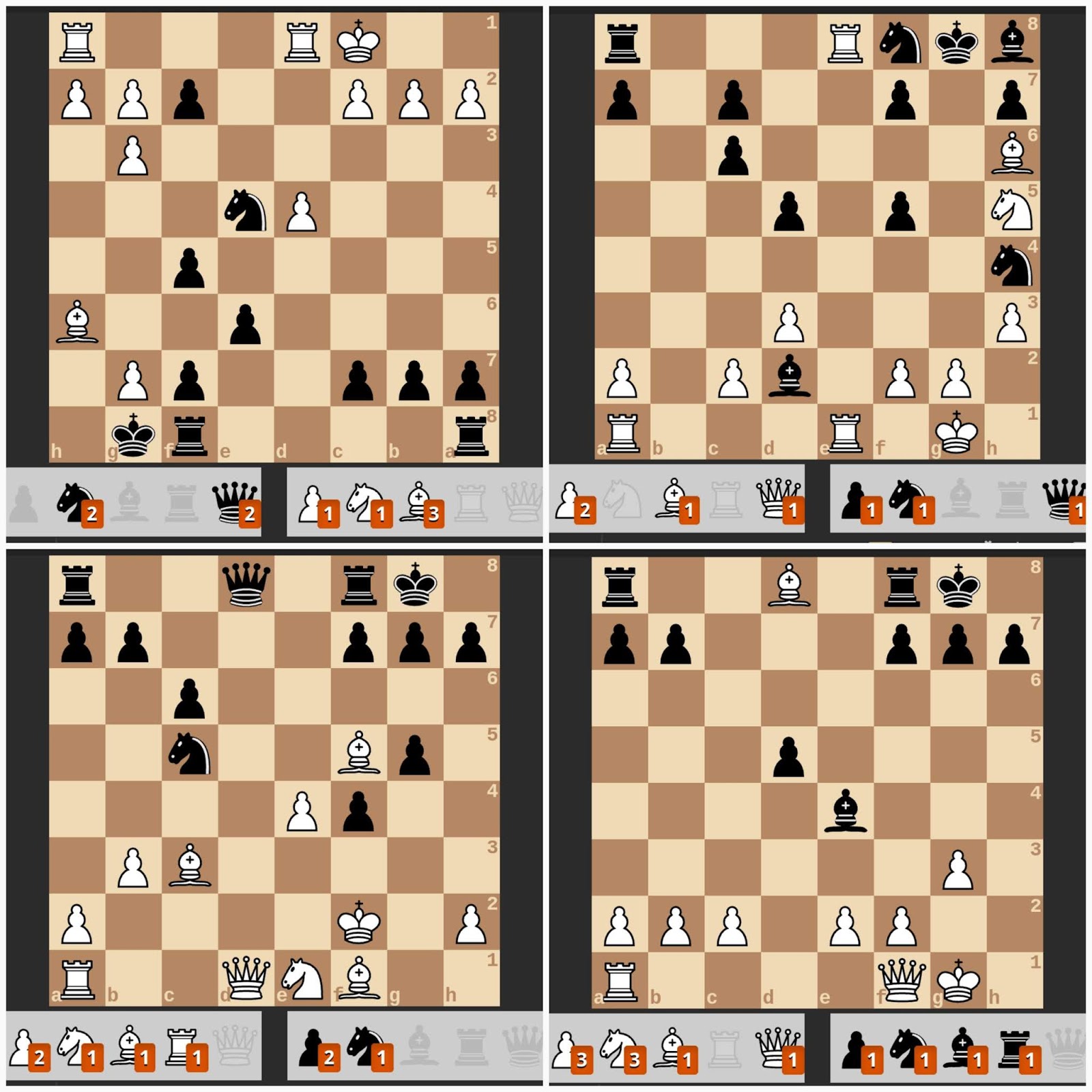 Picking Up the Queen with Check 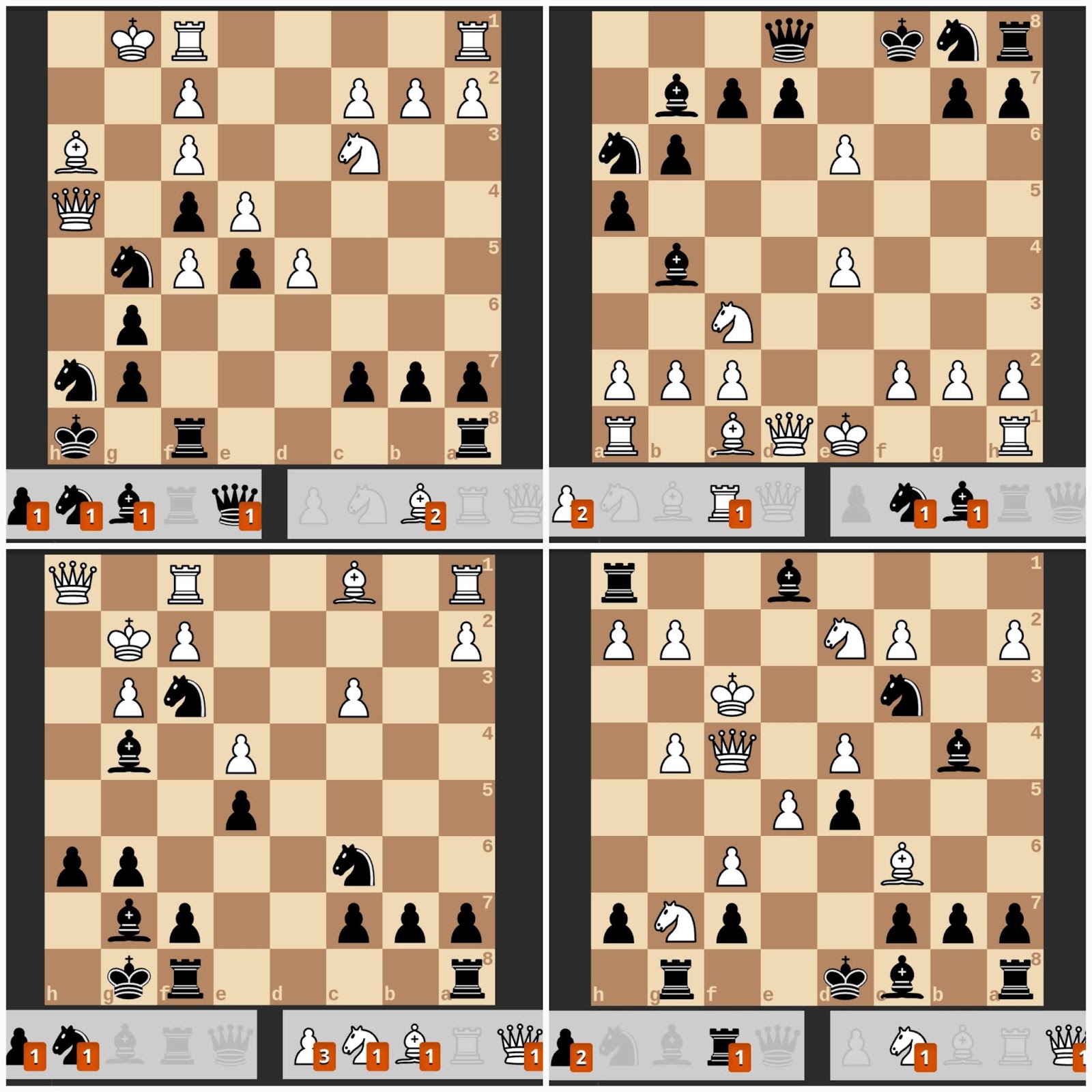 Mating Patterns with the Queen 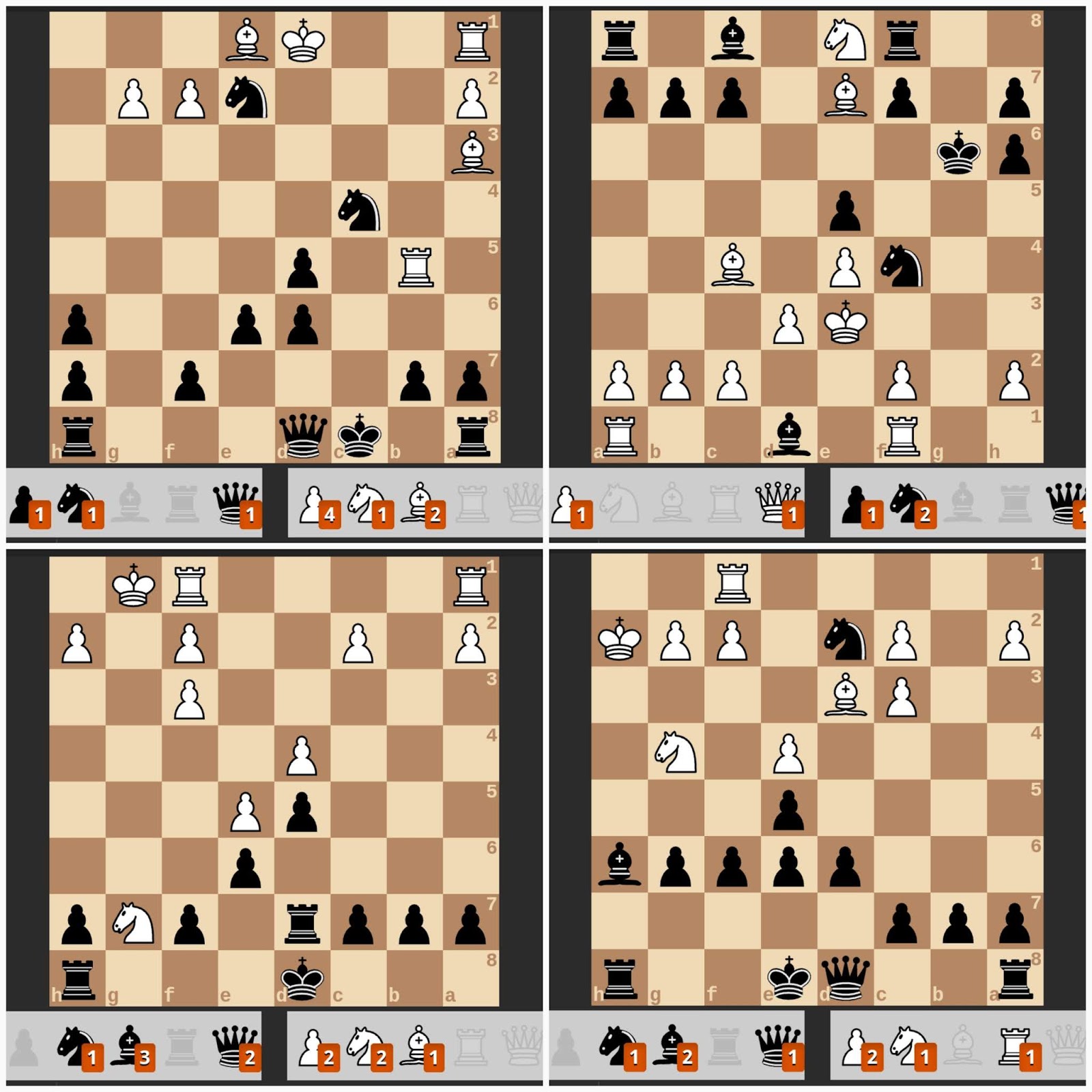 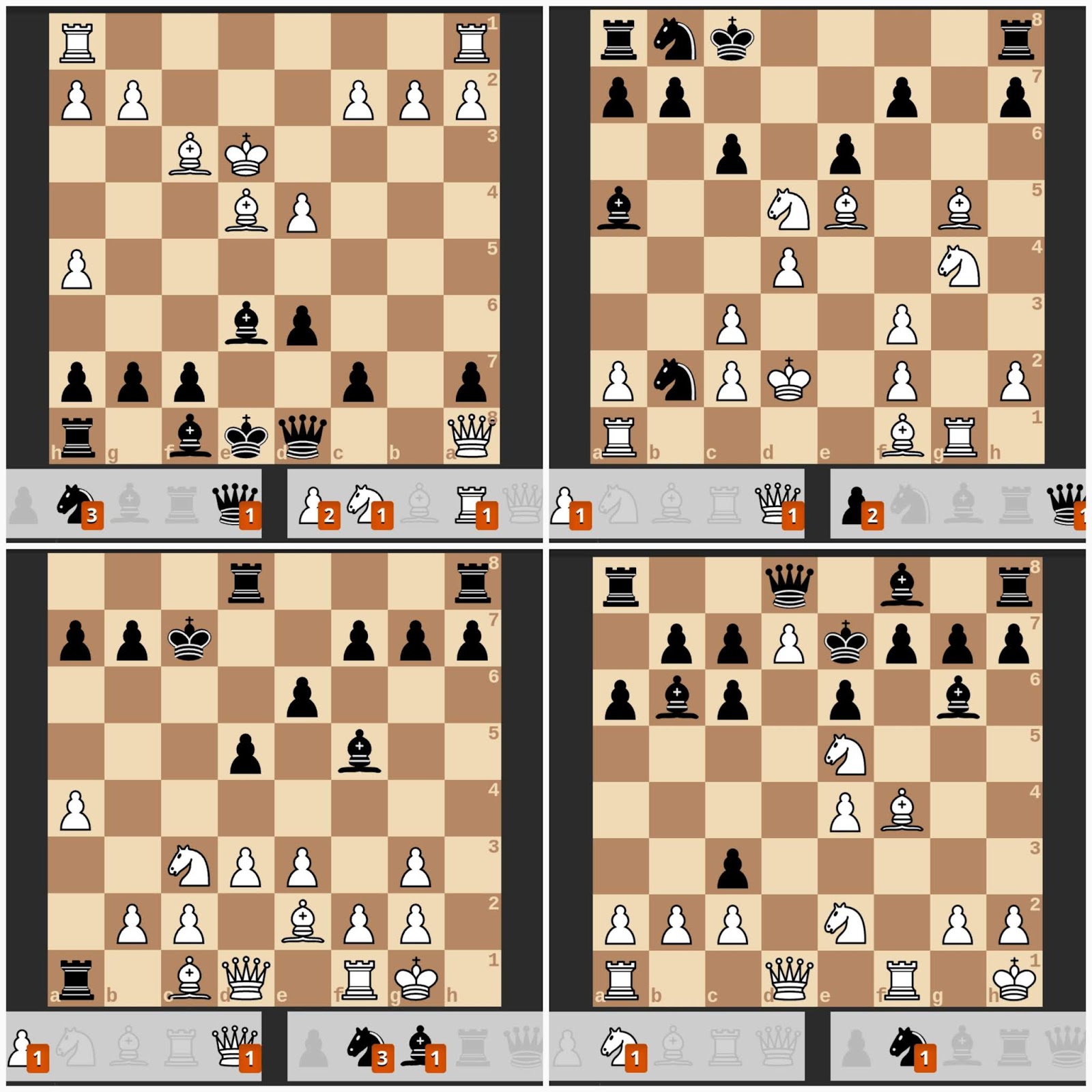 Mating Patterns with Rooks or Knights 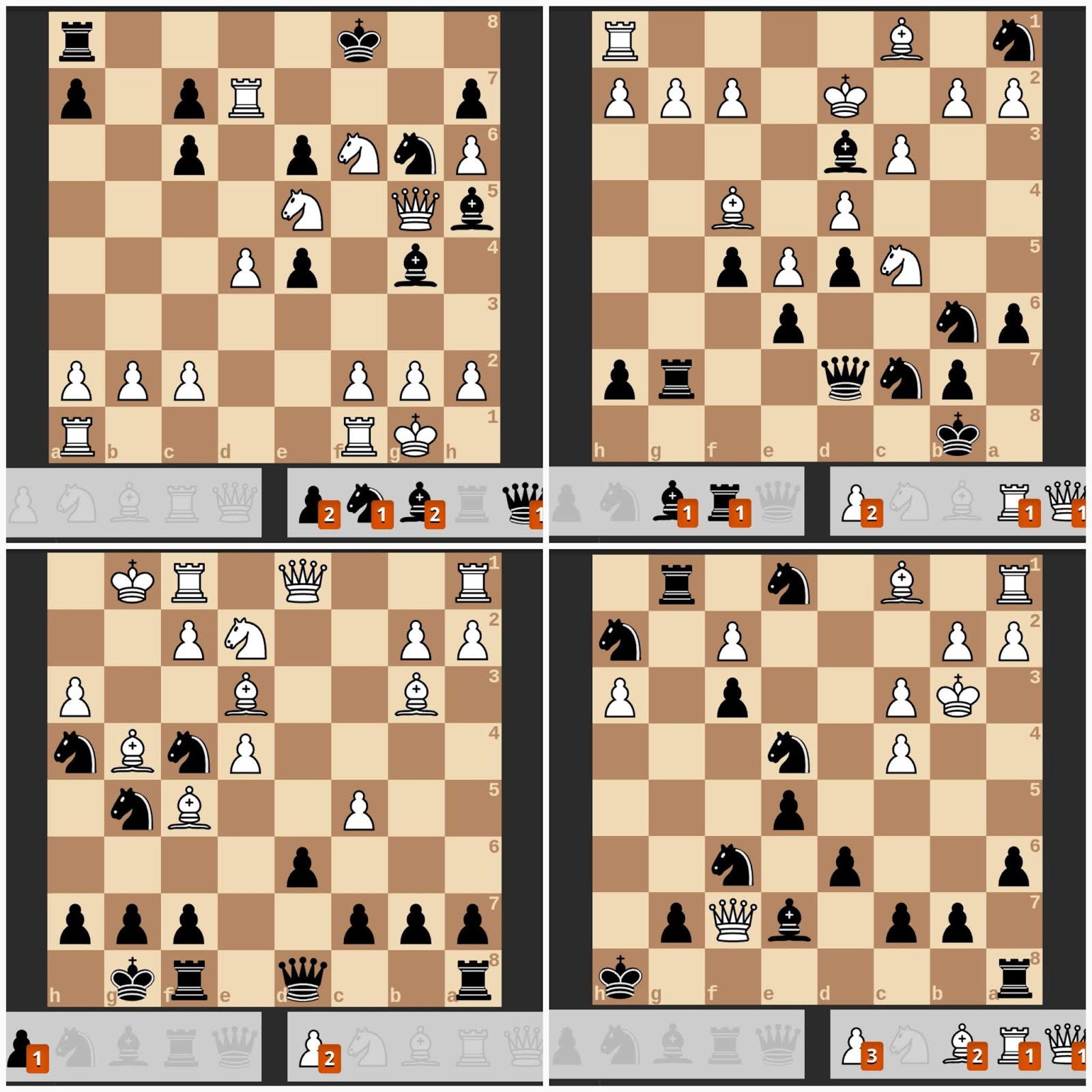 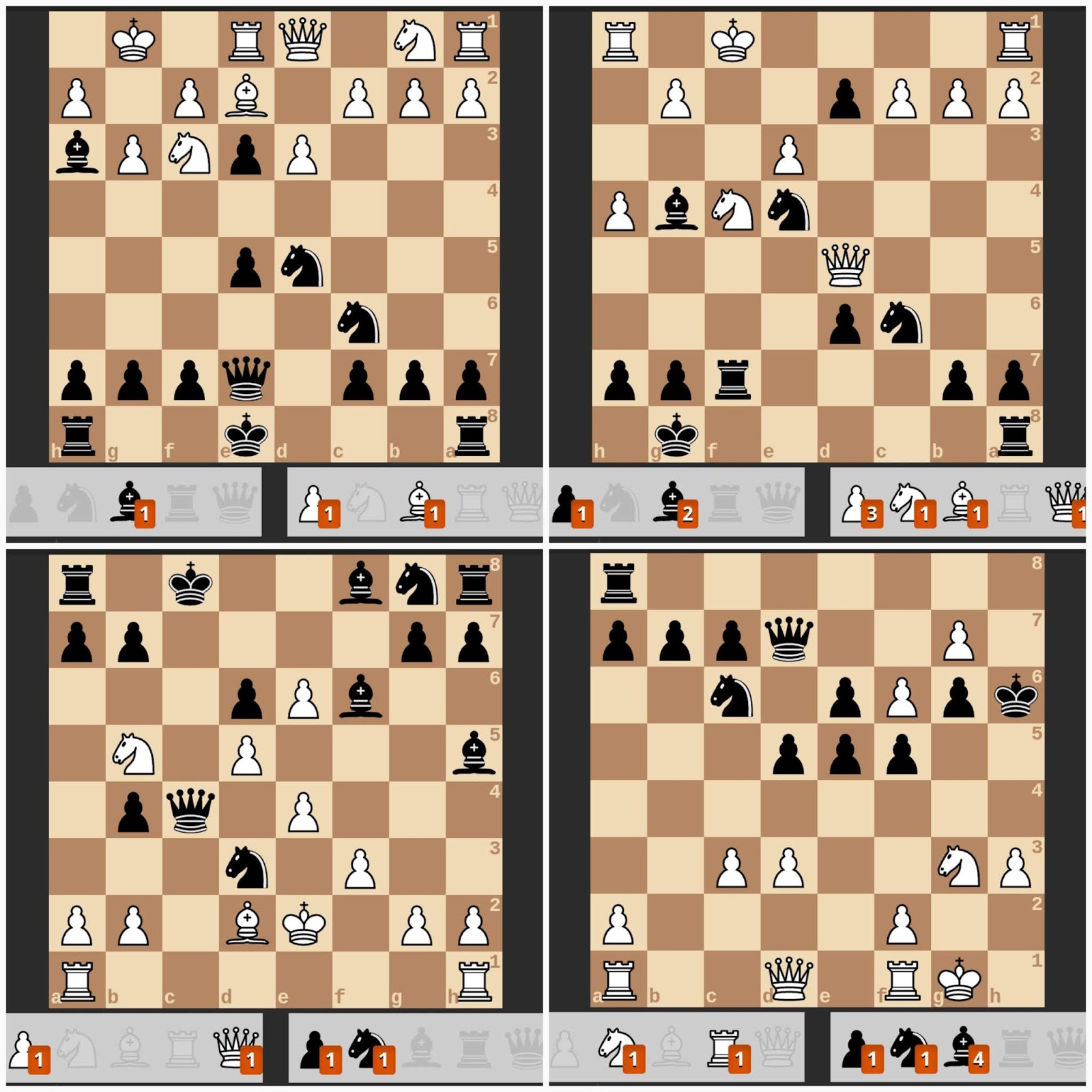 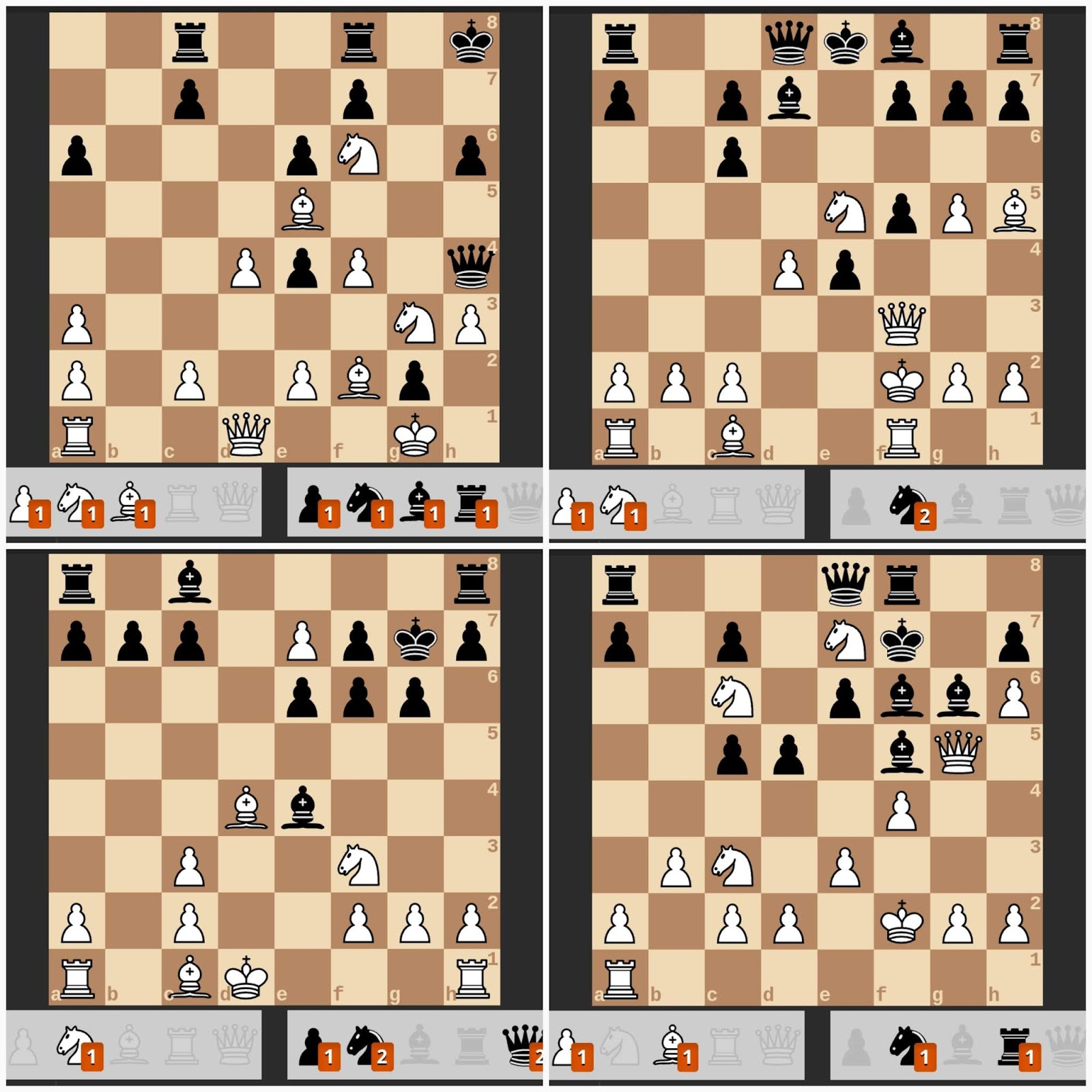 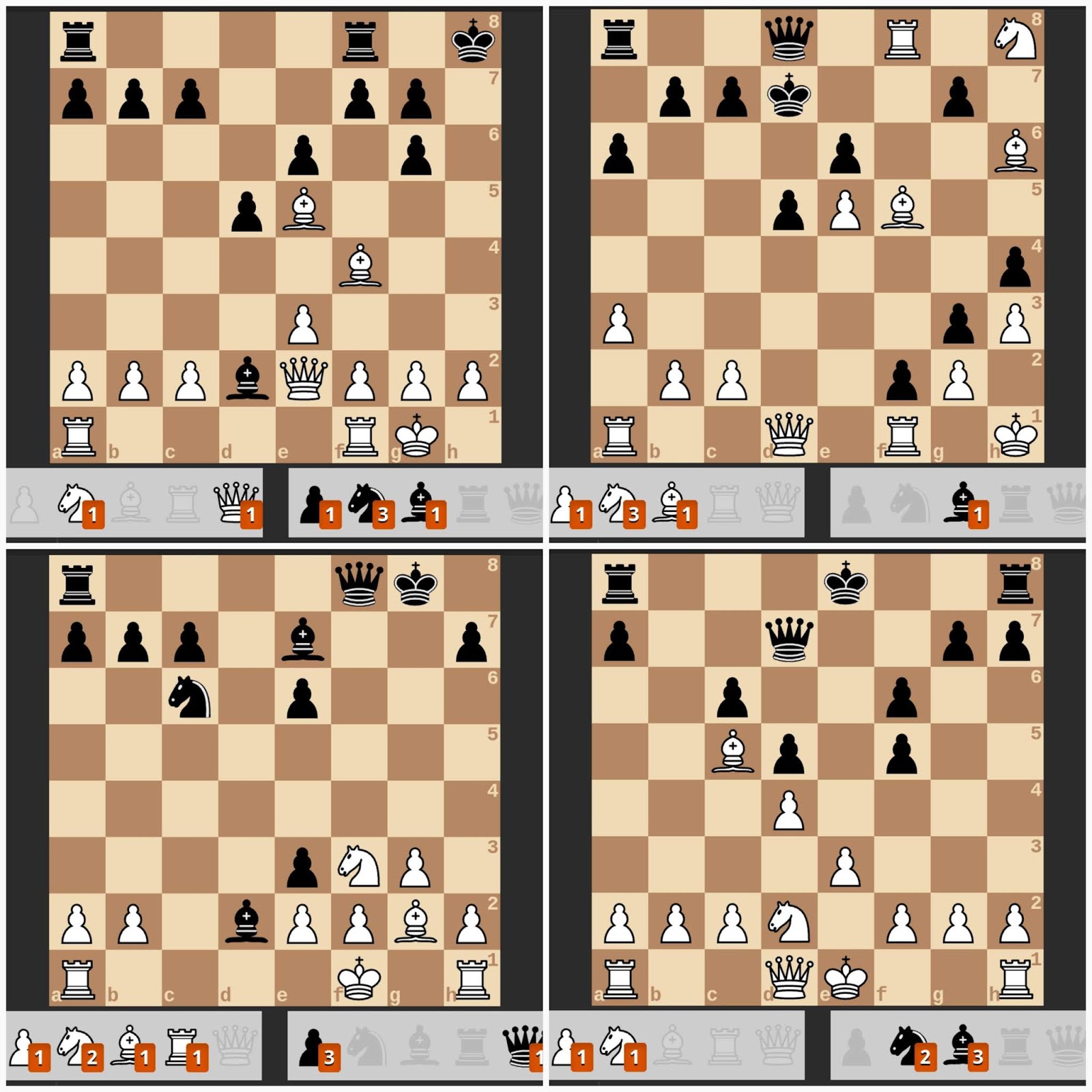 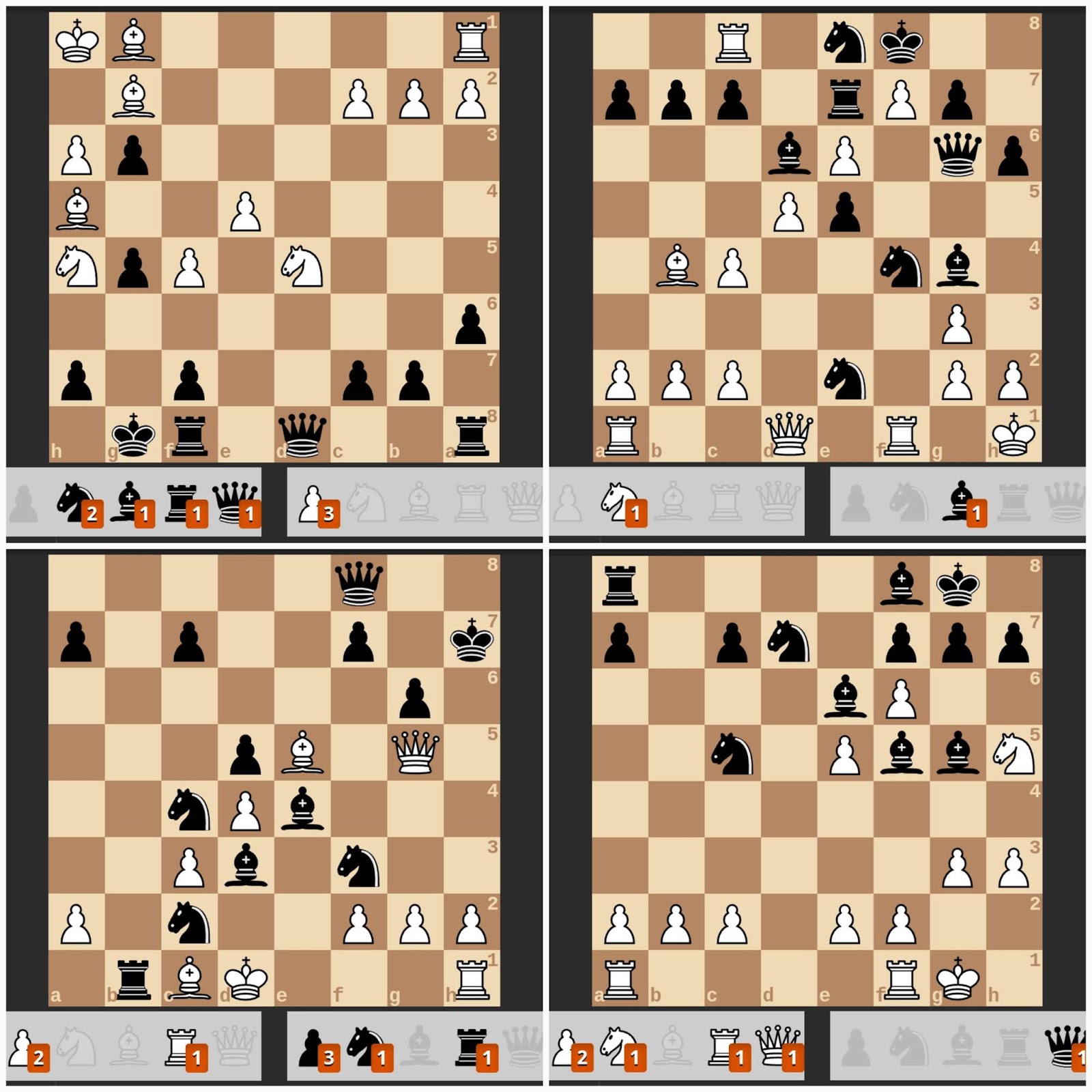 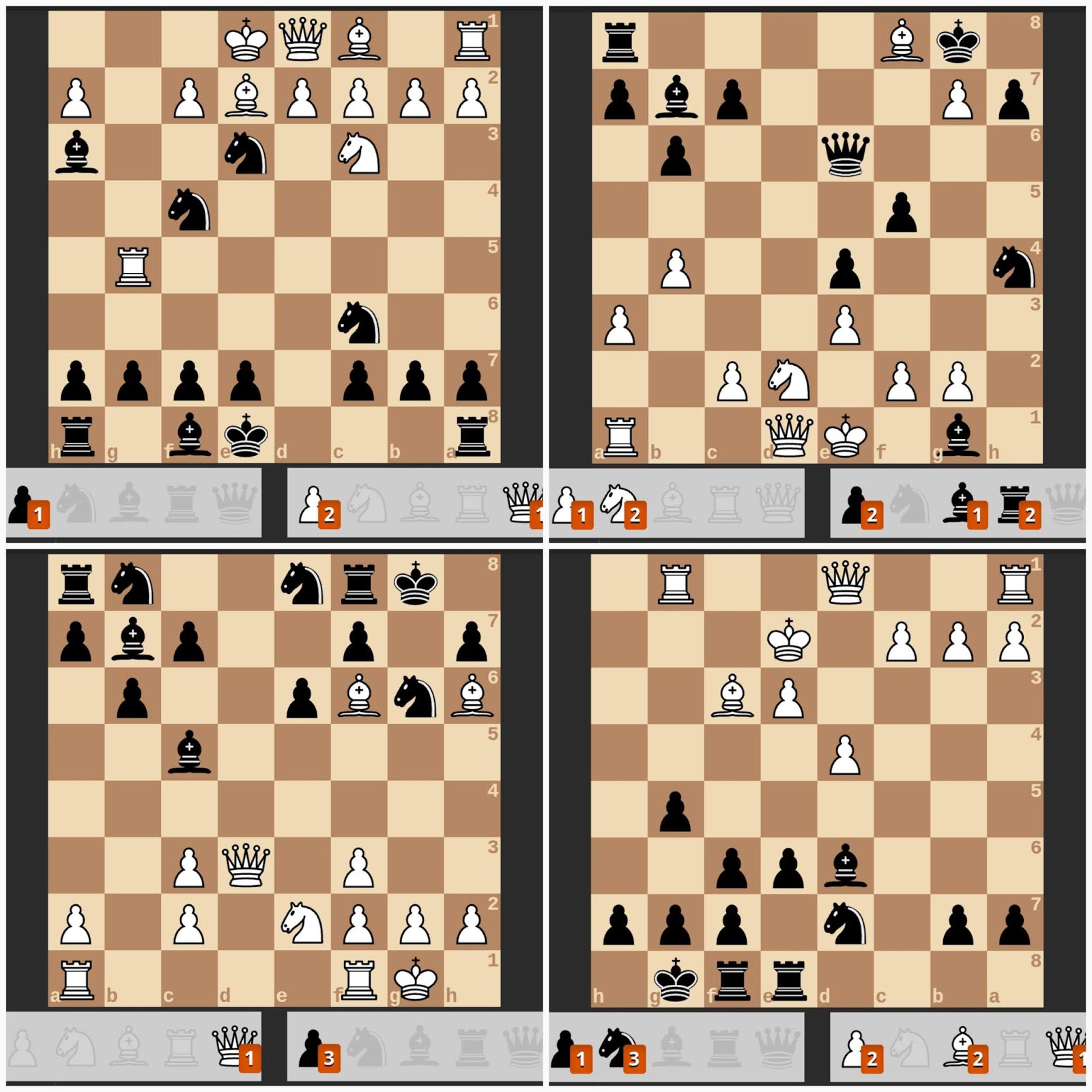 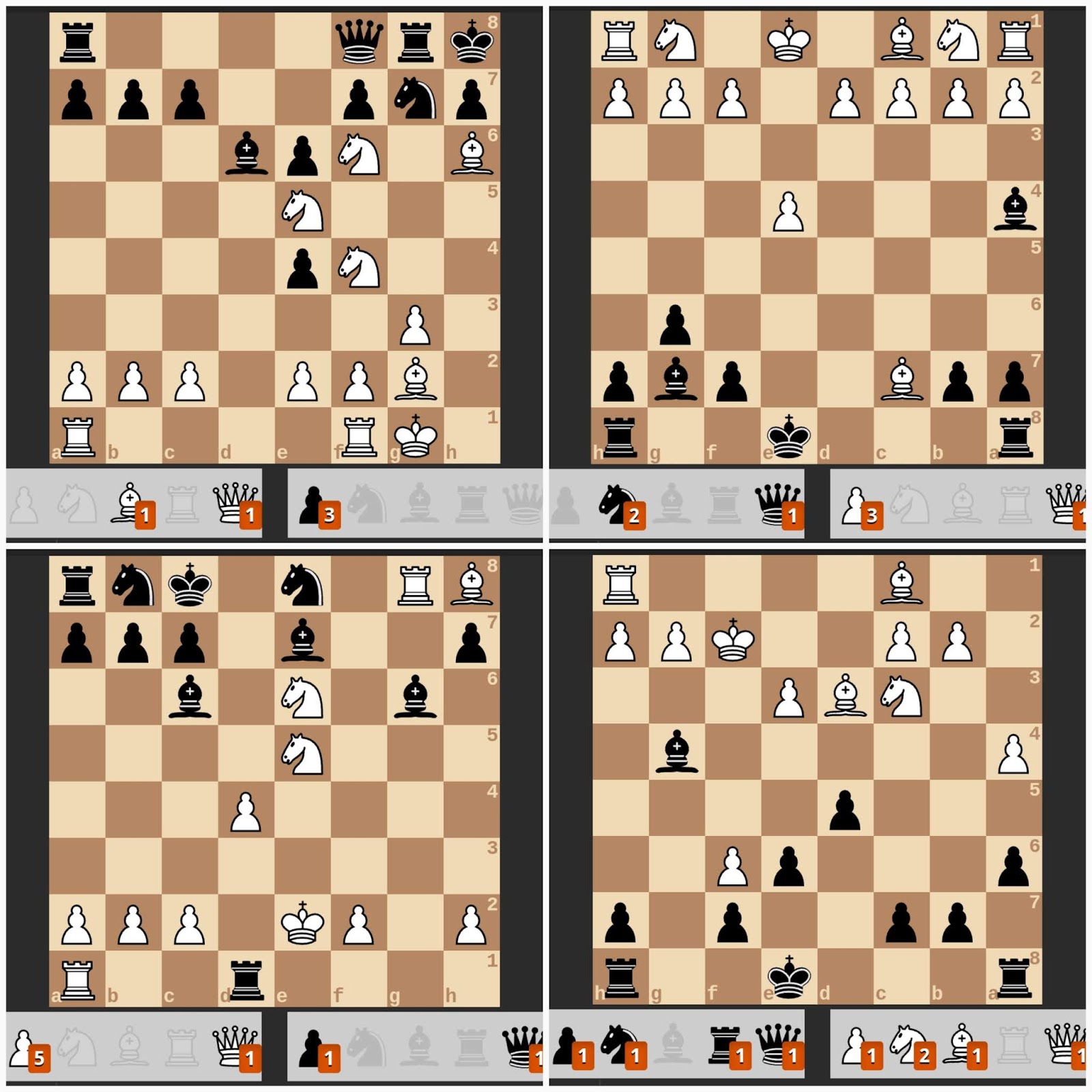 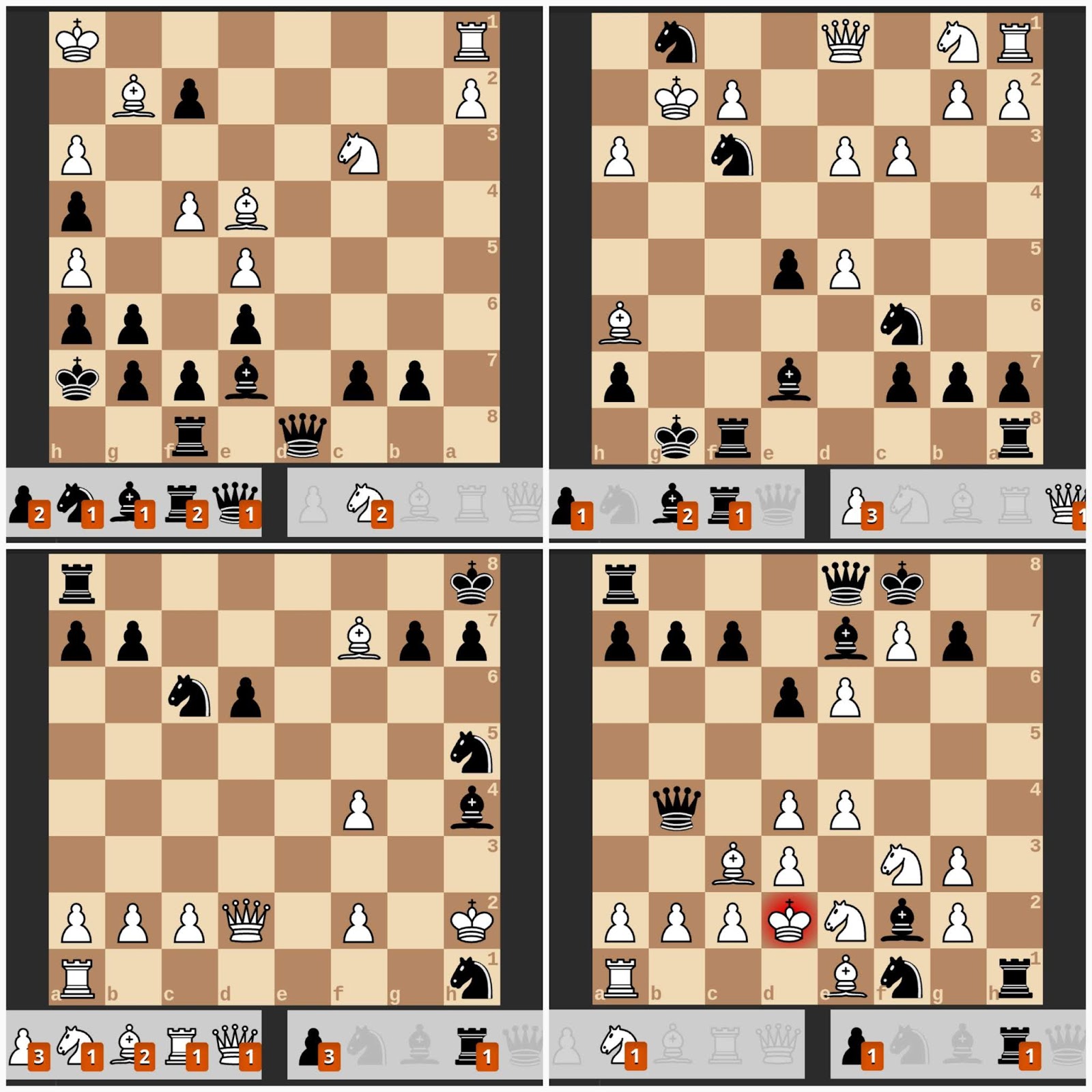 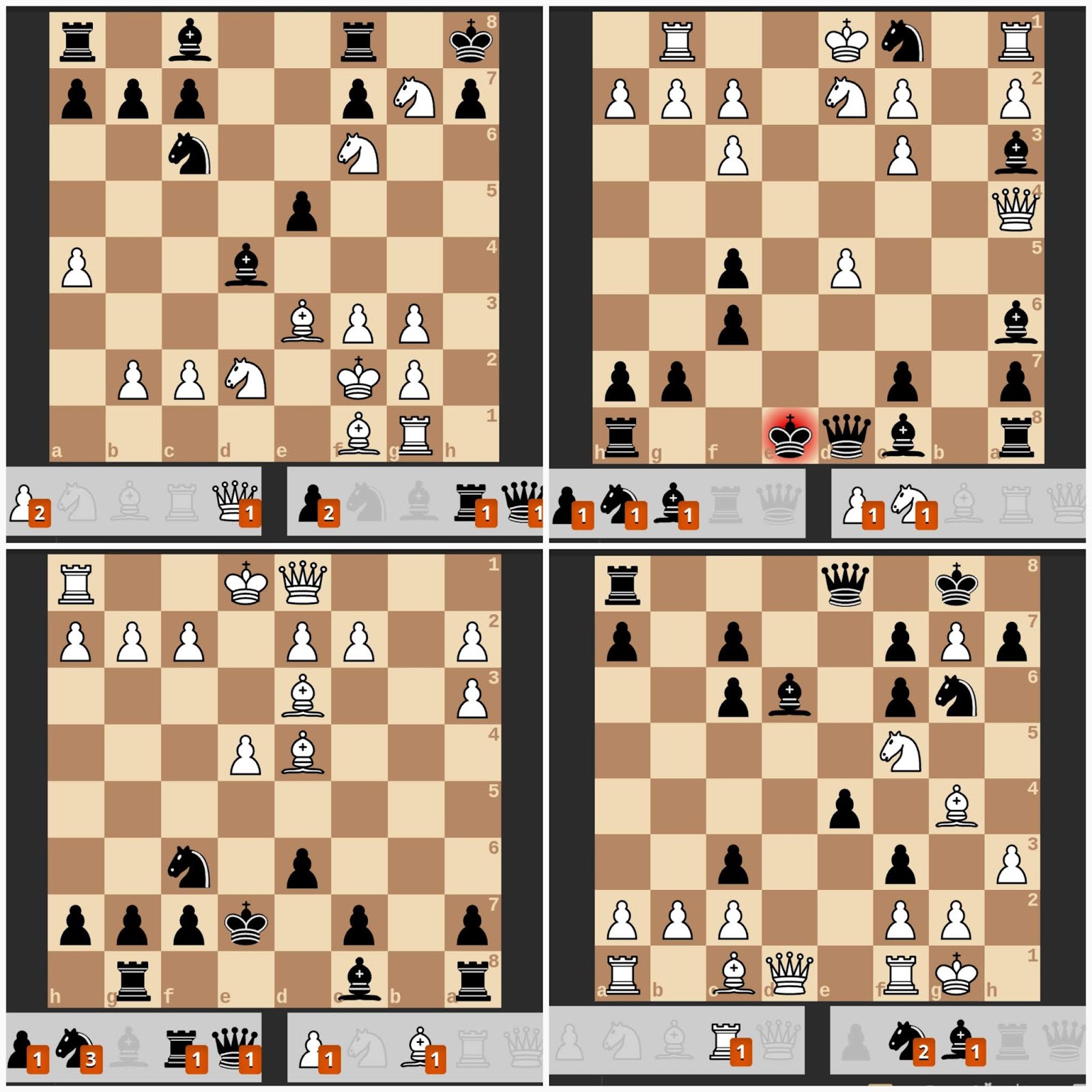 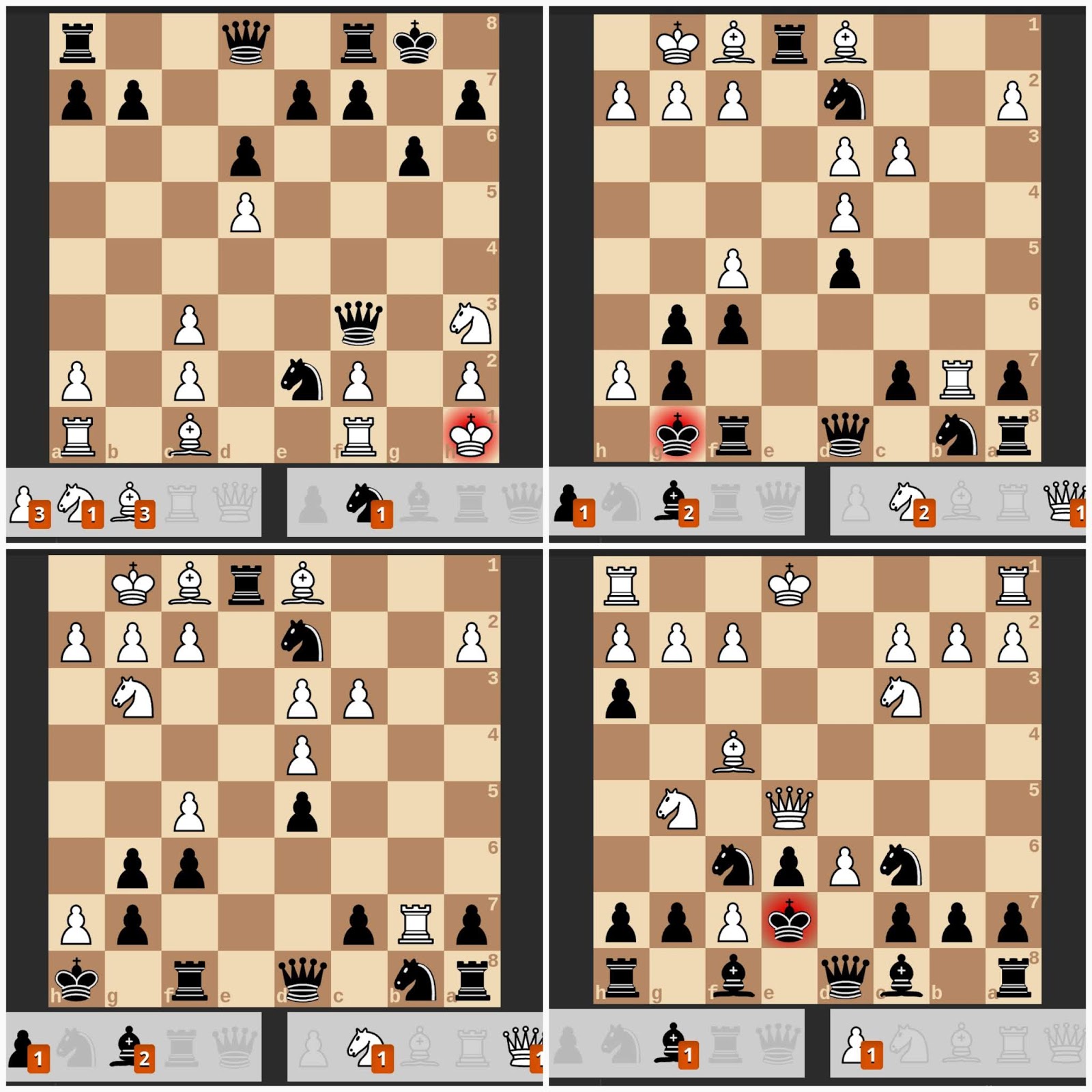 I hope you enjoyed these puzzles. Here again is the solution study with the games these positions came from, the themes they represent and the full variations so you can check your solutions. And here is the instructive video where I solved all these puzzles live on stream:


Do join us to watch the live action in the Candidates
& come to the House Variants Discord to chat with other players and spectators.

See the calendar for upcoming matches, and
check out the results in the Candidates cross-table.