The crazyhouse spin-off of the Lichess4545 league completed its 4th season a couple of weeks ago and we have 48 players already signed up for the 5th season which is will start soon. Like Lichess4545 on whose Slack the league operates, the ZH-ero league encourages the play of online chess at a slower time control. So while the zh standard is 3+2, with elite players often relishing 1+0, the league games are 5+5 or slower. The first three seasons were all individual leagues, but Season 4 trialled a new format with a team league (4 teams of 5 players) played over three weeks with players facing off against their opponent on the corresponding board each week. Each match comprised two games of (4+b) + (4+b) crazyhouse on board b, which meant board 1s played 5+5 while board 5s played 9+9.

Four top players of the game were recruited in to be the board 1s of each team in JKtheBullfrog, TheFinnisher, Mugwort & RapidVariants, and among other invites were the Dutch International Master VariantsOnly who proved to be a strong board 2, and the popular streamer pepellou from Spain, a recent crazyhouse enthusiast who would go on to stream all his matches on board 3. Team selection was done by board 1 players choosing their board 2s in reverse order of strength, then board 2s selecting their board 3s in the reverse order in which they were selected and so on. As well as the league founder, Zher0, kostasvl, colwem, FischyVishy & I (okei) were introduced as crazyhouse mods to help run the league. We are particularly grateful to colwem who has spent hours programming the crazyhouse team league website to do clever things like recognise when participants schedule or start a game and automatically post up the schedule, the game link and the result on the website. It is not yet perfect, but we are confident enough to roll out Season 5 to as many people as want to join.

Now, for the rest of the blog, we will recap what happened in Season 4 and share a plethora of puzzles for your enjoyment. Here were the rosters of the 4 teams, with PawnInTraining and fgalla also subbing in as alts on boards 2 and 3 respectively: 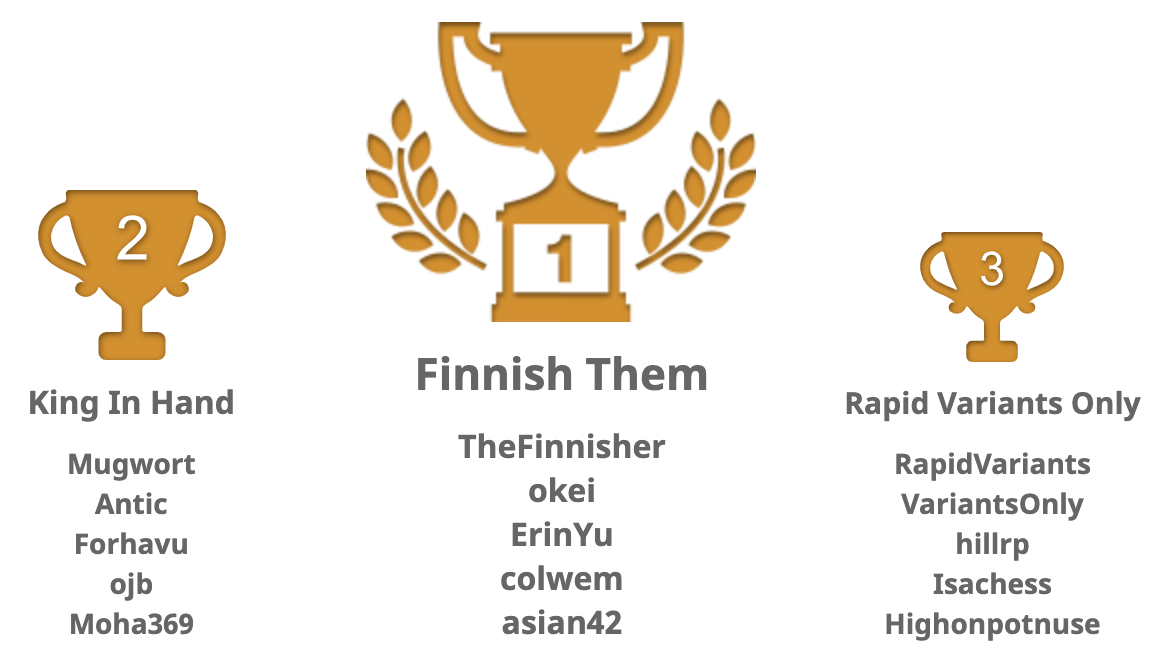 In the end, FinnishThem, led by TheFinnisher came home victorious, but only on tiebreaks thanks to game points won. So every game mattered! TheFinnisher was equal top-scoring board 1 with 4/6, okei scored 2/6 on board 2, ErinYu and colwem both scored 3/6, and asian42, learning crazyhouse for the first time, was top scoring board 5 on 4/6. Congratulations to everyone for such a well-fought season. 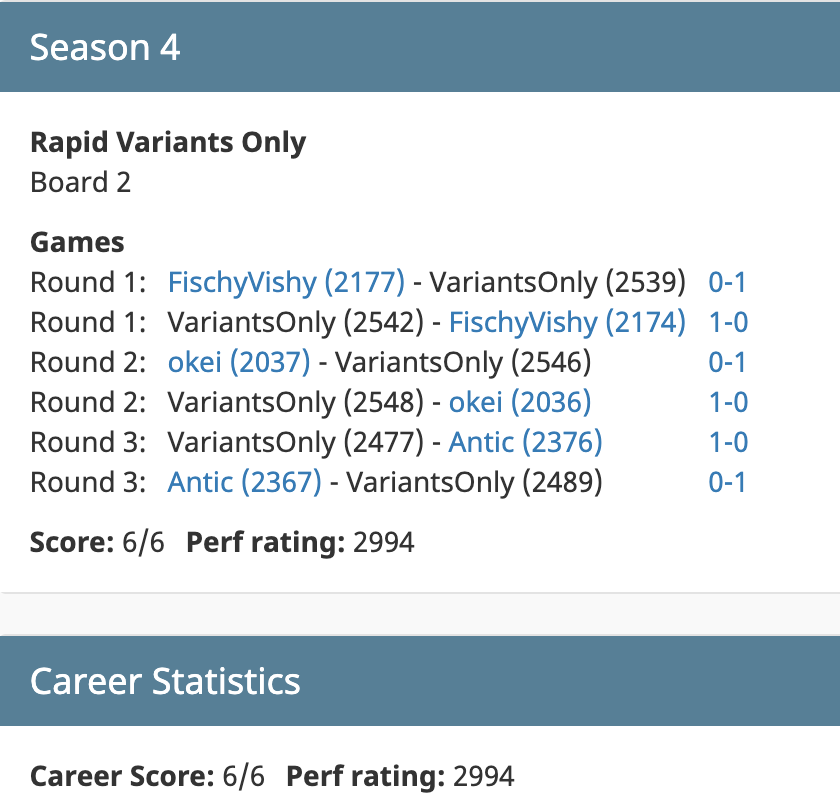 Special congratulations to IM VariantsOnly for being the man of the season with a perfect score, winning 6/6 on board 2 with a performance rating of 2994 — echoes of IM lovlas who in Lichess4545 once scored 8/8.

As a curious statistic, Black won 58% of the games on board 1 and the White advantage in crazyhouse (+1.9 according to Stockfish) which forces us to play 2-game matches was in fact most pronounced on board 5.

For a recap of the games and positions in Season 4, check out the end of season recap stream, embedded at the end of the blog. You may also be interested to check out the playlist of previous recap videos as well as live streams of zh league matches. In the video, I discuss a couple of the games and I spoil most of the puzzles below. To practice them yourself against the computer, click here, or to see the solutions with full variations click here. At the end of the blog you can find hints to these puzzles and the video recap. 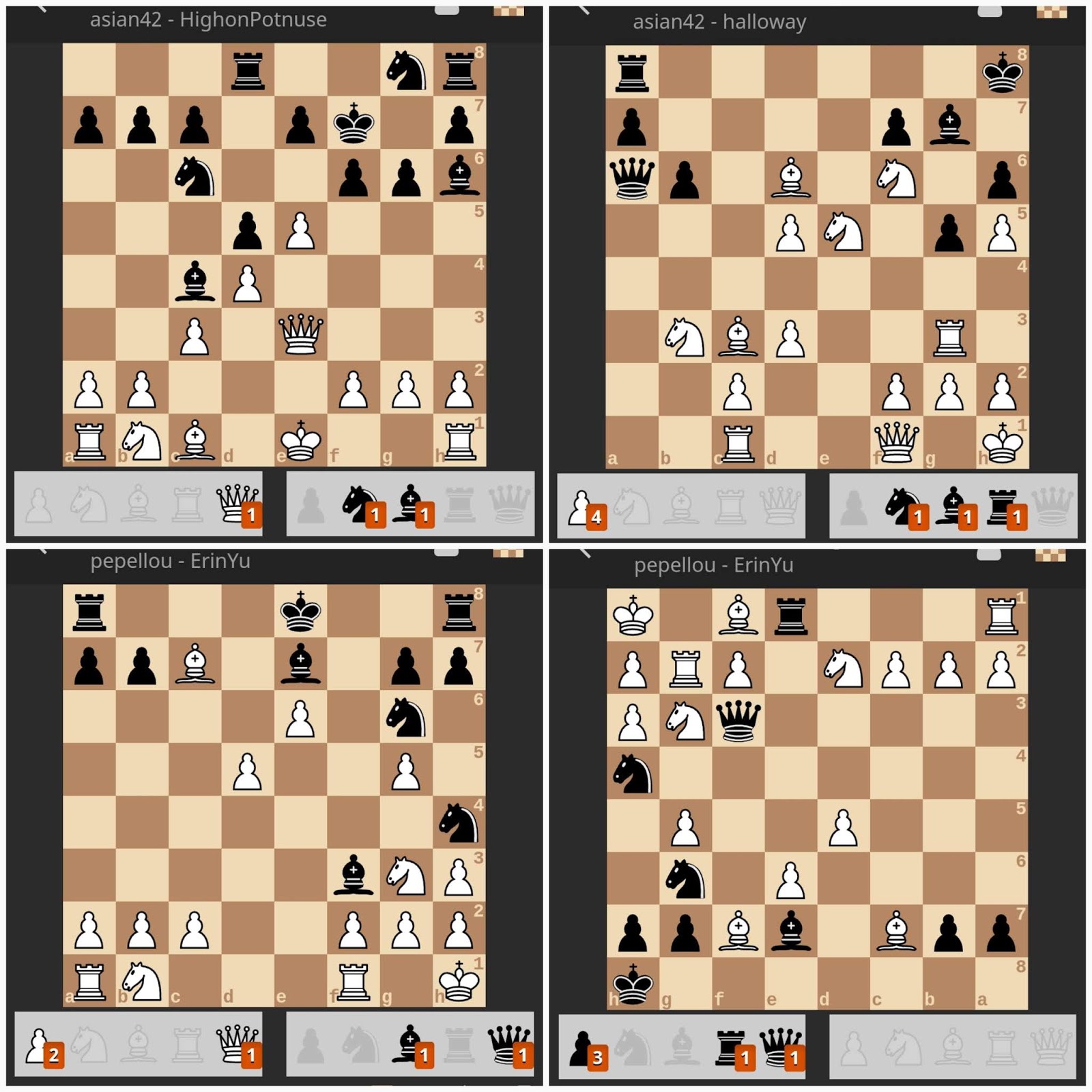 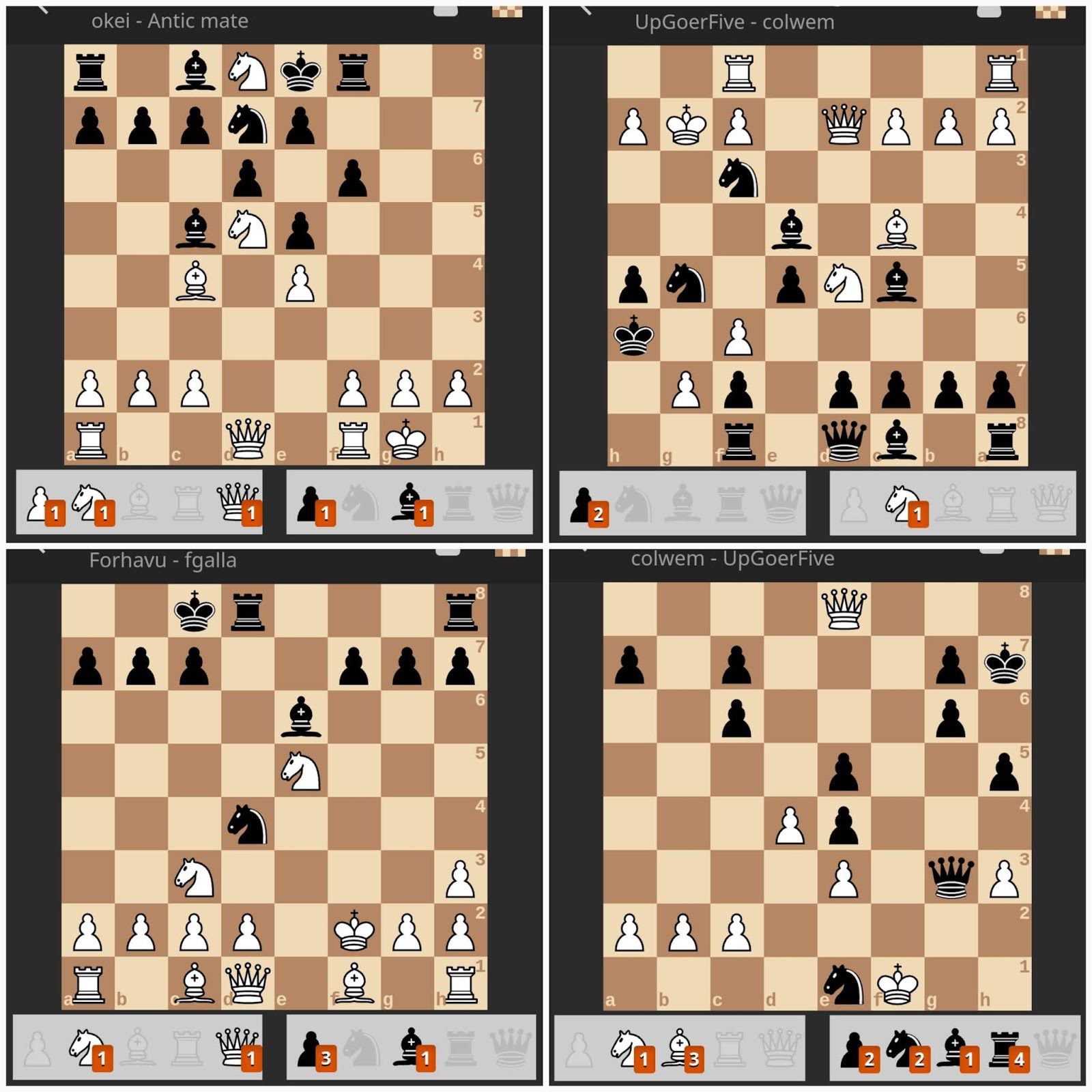 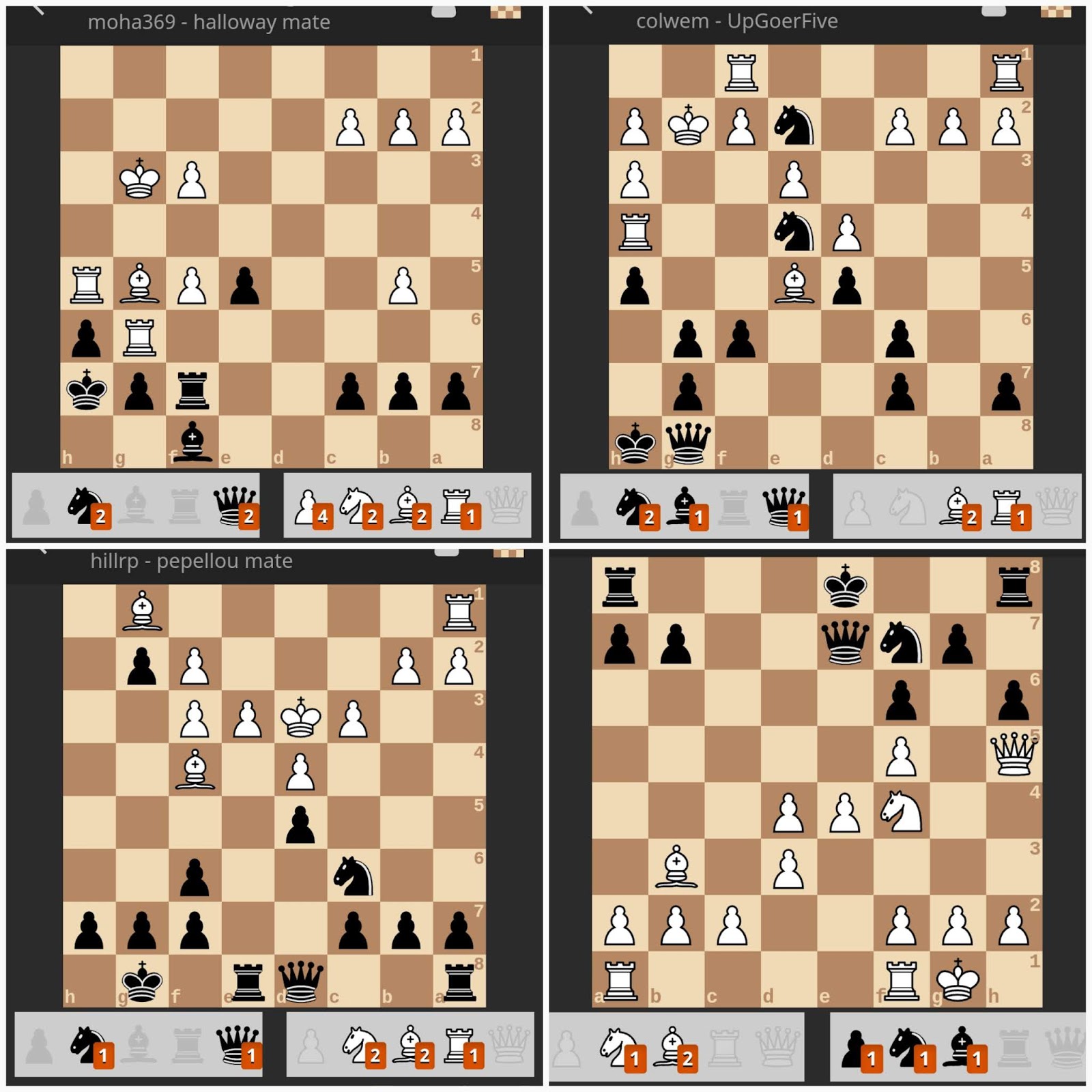 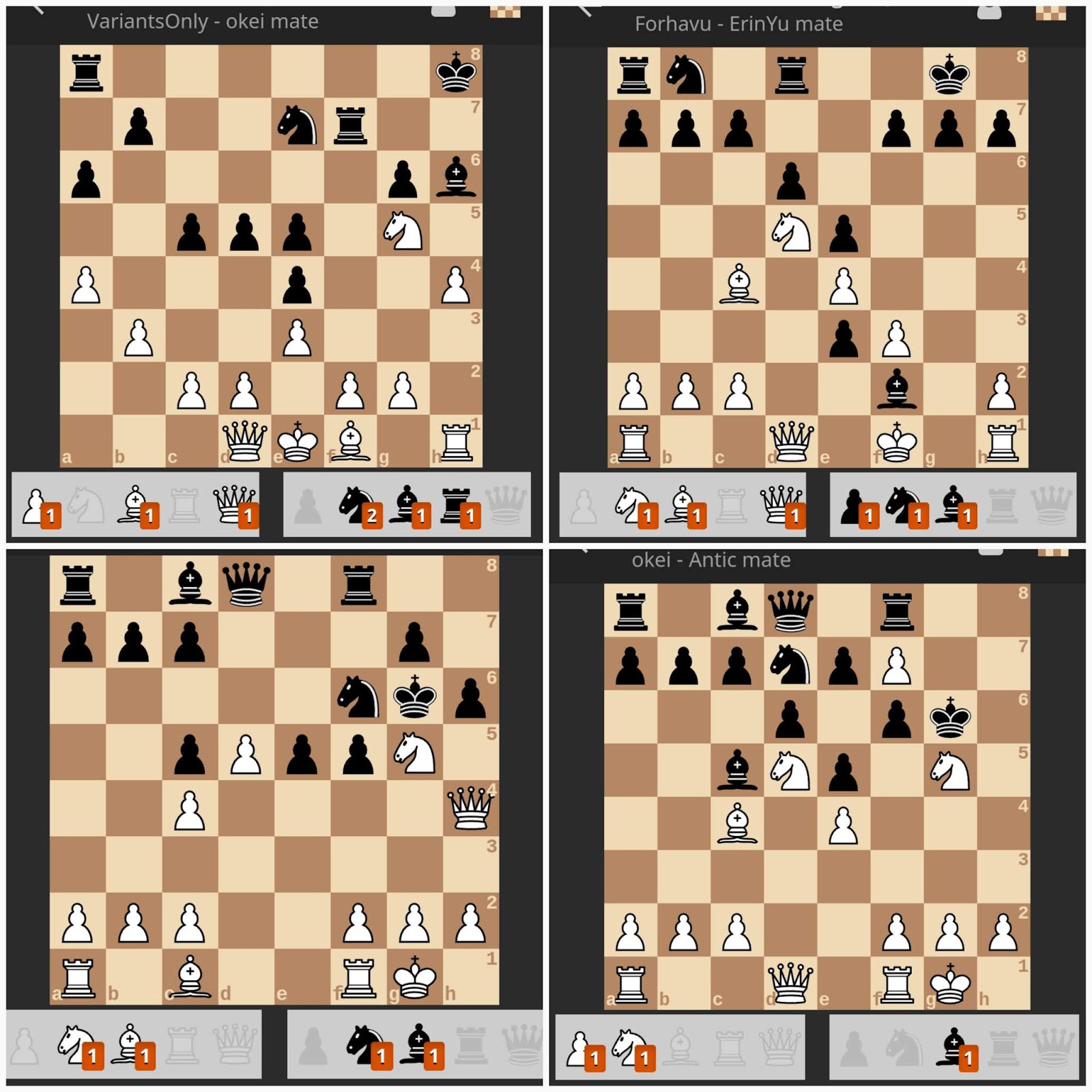 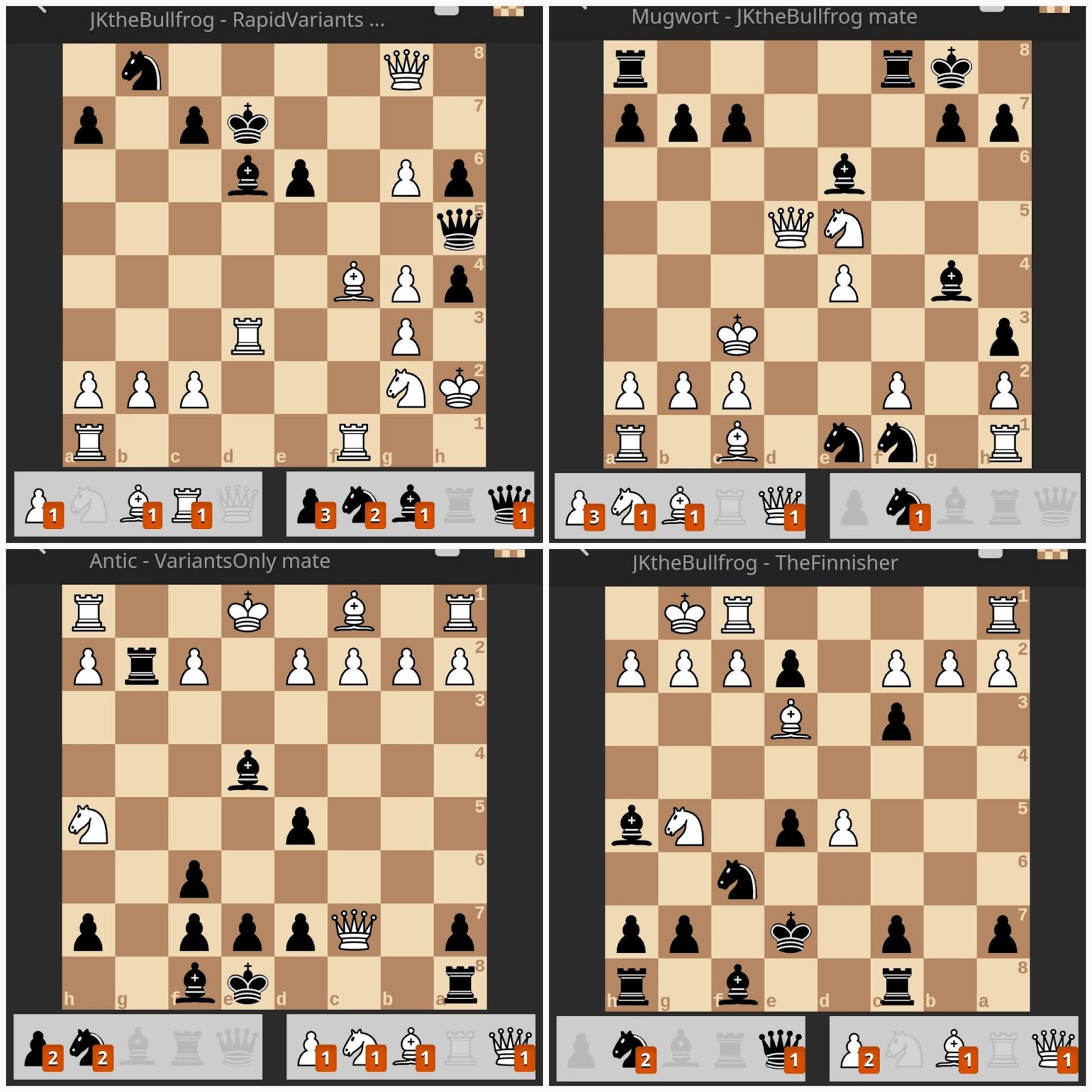 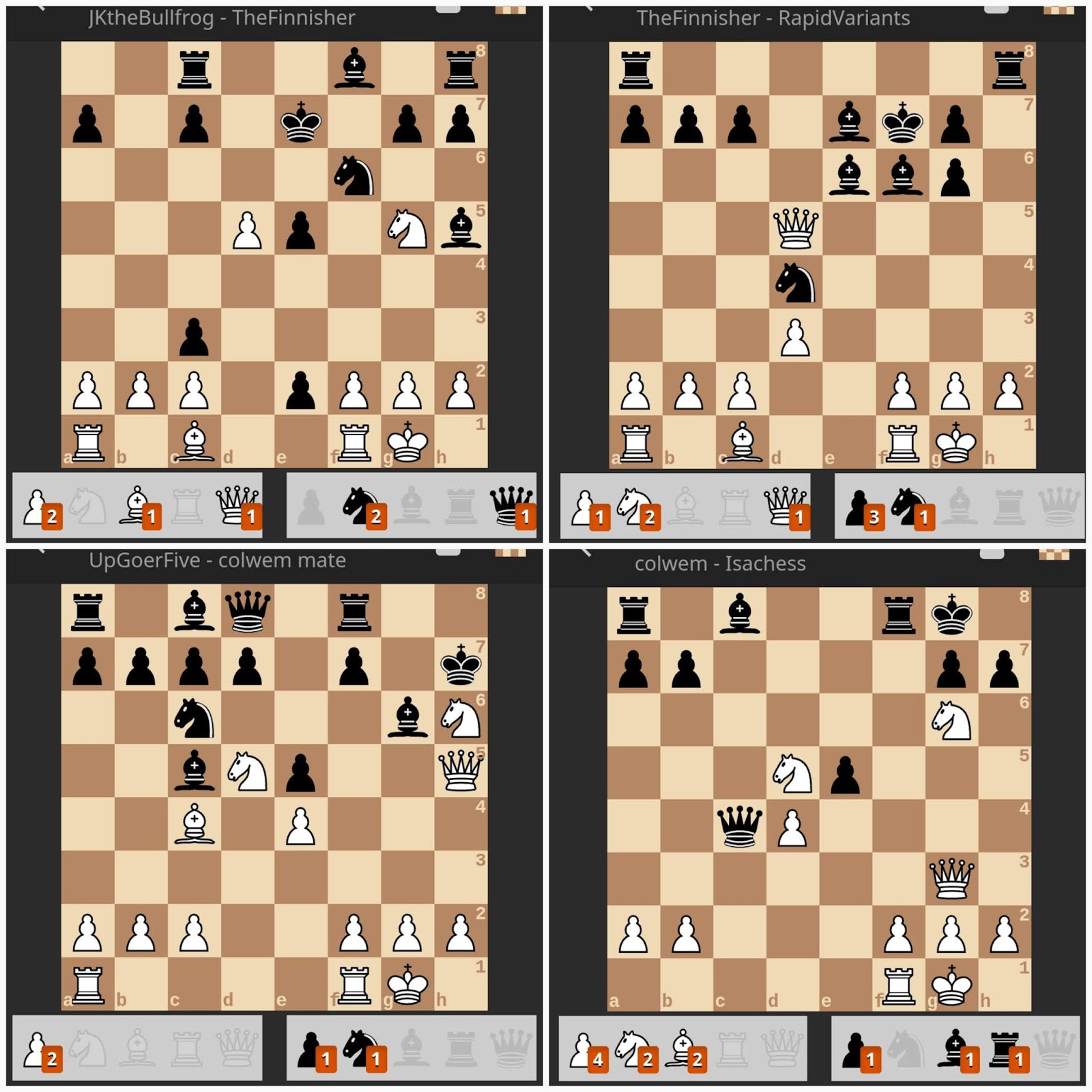 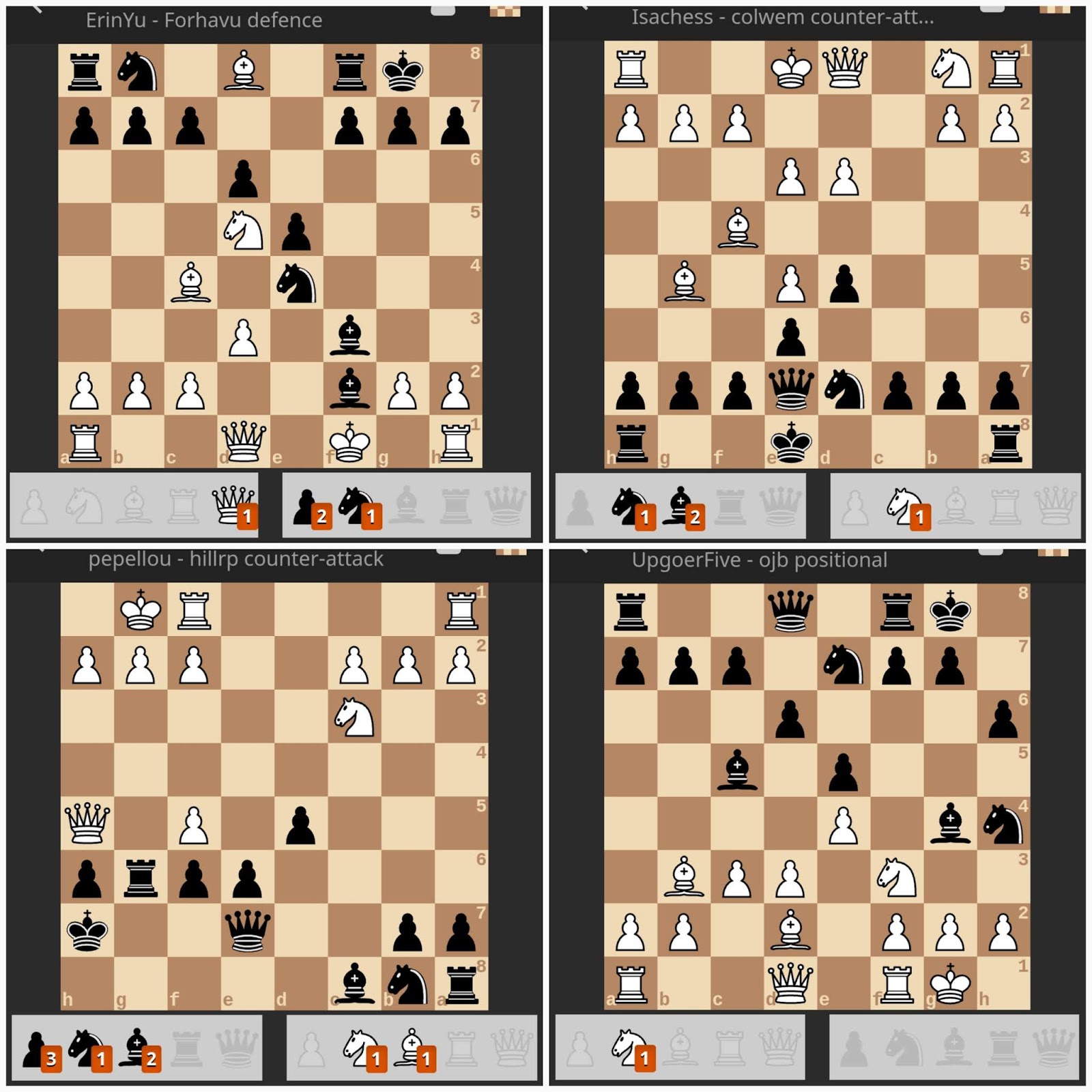 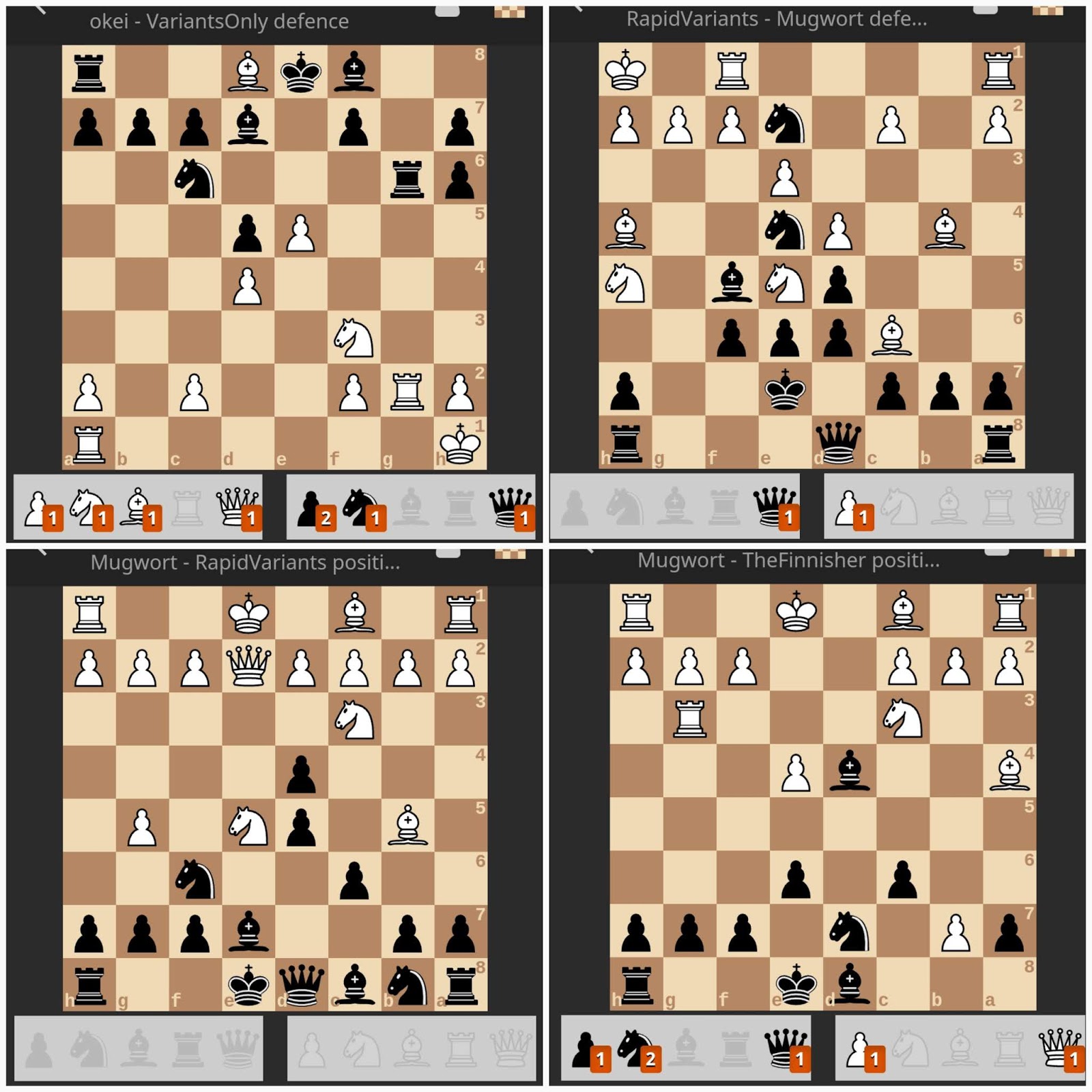 You can practice these puzzles yourself against the computer here or see the solutions with full variations here.

The 1+0 Crazyhouse World Championship is underway organised by littleplotkin! There were 67 entrants who made the registration deadline of April 13th. Three had to be excluded for having played insufficient games of crazyhouse, leaving 64 participants in a single elimination knockout. Once the field is reduced to 8, there will be a round robin Candidates phase, the top two then facing off to become the 1+0 Crazyhouse World Champion.

At the elimination stage, participants have a week to get in touch with their assigned opponents and play the best of 20 games, so the first to 10.5 wins. If the match isn't played and no contact is made by either player with the organiser littleplotkin explaining why, then it will result in a double forfeit. In case of a tie, the match continues a further couple of games and again until the tie is broken.

Scheduling and results should be posted in the Championship thread on lichess. The Candidates phase will be 30 games exactly with every game counting towards the tally of each player. Therefore, number of matches won and head-to-head only count as tiebreakers. The Final will be 100 games scheduled over three or four different dates.

There will be prizes for Candidates, Finalists and for the Champion. The exact prize structure is yet to be determined but thanks to JannLee, opperwezen and to other members of the crazyhouse community who have already stepped in to offer money towards the prize fund.

The first round has a deadline of 28th April. Participants should message their opponents as soon as possible and contact littleplotkin in case of any difficulties in scheduling. Each match of best to 20 is likely to last at most 40 minutes. Here is the full draw:

Thanks to CrazyHome, somethingpretentious and theLAZYmd for helping draw up the list of entrants and order them by average of current and peak crazyhouse rating with some nifty coding to create the seeding.

Have a great tournament!

P.S. For those looking forward to the official 3+2 Crazyhouse World Championship, this is forecast to start at the end of May.
at April 17, 2019 No comments: