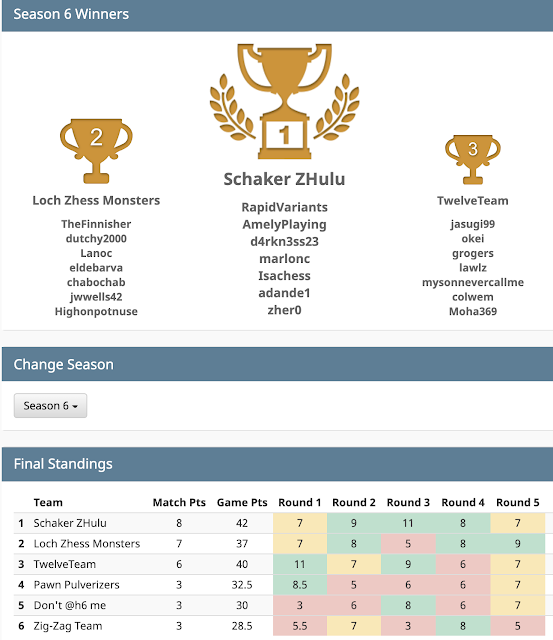 Player of the season was Isachess with 9/10. This is also the second win in a row for both RapidVariants and Isachess who were in the winning team in Season 5 also. Loch Zhess Monsters came second and TwelveTeam third. Well done to everyone for making an exciting and competitive season. 4th 5th and 6th all came essentially equal with only tiebreaks separating them.

As well as doing several recap videos of the season, I also hosted a first ever crazyhouse puzzle battle setting two big-hitters LegionDestroyer & CrazyHome up against each other (and the clock) to solve puzzles based on this Season. Enjoy the puzzles below and watch how the puzzle battle unfolded to see some of the solutions. You can also practice the studies below in the following practice against computer studies:

I will also post links to the solutions at the end of the blog. 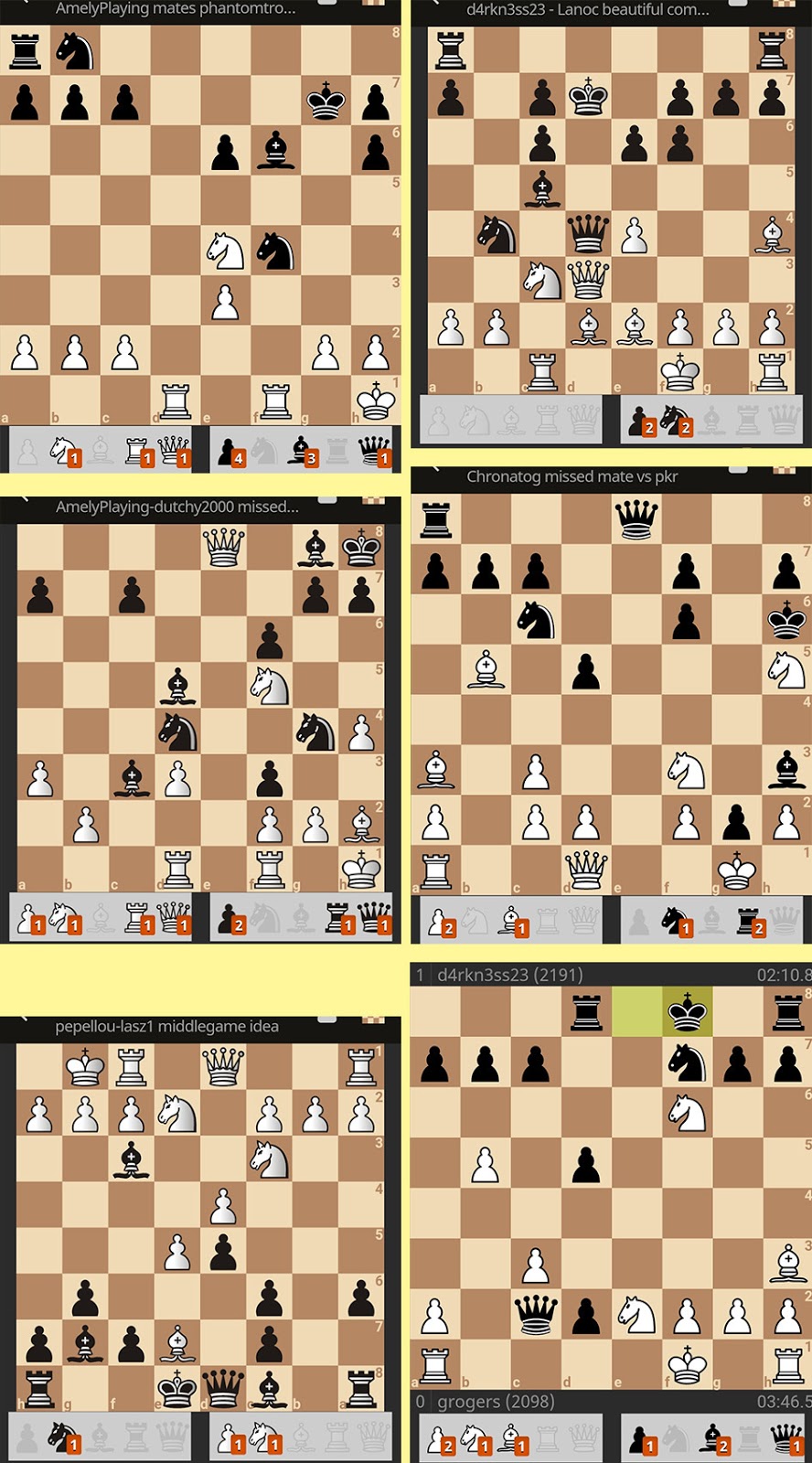 Once you have had a go for yourselves, you might enjoy the puzzle battle between LegionDestroyer & CrazyHome played on April 1st, 2020 on Levels 1-7.

Season 7 of the crazyhouse league finished on Christmas Day 2019 and had six teams with six players on each team and at least one alt on each board in a 5-week round-robin. The teams were one board smaller than in Seasons 5 and 6 but still showcased some of the best players of the game on board 1: JKtheBullfrog, Mugwort and gsvc took turns for Kneel Before Zhod, while the other teams were headed up by TheFinnisher, RapidVariants, LegionDestroyer, vectorveld and CrazyHome.

The champions of Season 7 after a hard-fought race were the undefeated Recovering Buggers (2 wins and 3 draws) who won on tiebreaks from Rook & Rollers (3 wins and 1 draw). Both scored 7 match points out of a maximum of 10, but Recovering Buggers’ game score of 35/60 outmatched Rook & Rollers on 32/60. Meanwhile, Kneel Before Zhod recovered from 2 match losses to surge into third place after hammering their last two opponents racking up an impressive 35 game points (equal with the leaders, although with one fewer match victory).

Congratulations to the MVPs of Season 7: Chronatog and fgalla who both won 9/10. We expect them both to play a board higher in future. But even bigger congratulations to the winning team for an amazing combined effort: Recovering Buggers LegionDestroyer d4rkn3ss23 (7/8) Chronatog (9/10) Isachess (8/10) UpGoerFive & adande1 (7/10). 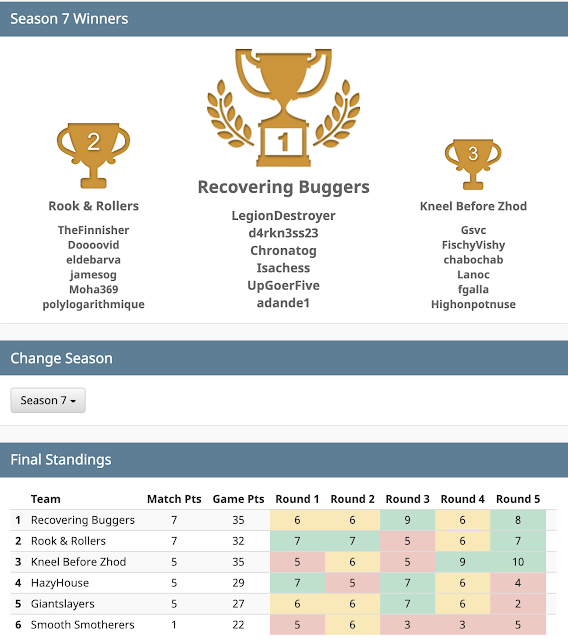 Player of 2019 goes to (drumroll) Isachess for winning three successive team seasons of the zh league, and one game short of being MVP for a third successive season. Each season he plays a board higher. He is an inspiration to so many that we can keep improving! Finally thanks to the mods colwem, kostasvl, Zher0 and okei for keeping the show on the road.

Before we embark on Season 8 of the zh league, we have been enjoying the beginning of 2020 with a  special Season 7.960 of 960 crazyhouse on http://www.pychess.org.  This is drawing to a close but the Crazyhouse World Championship 2020 is up and away. See the calendar on the right for upcoming matches and some of them will also be streamed live by myself, Mugwort, Kleerkast, JannLee and others. I hope you enjoy them!