Season 5 of the ZH League

Season 5 of the ZH League was the second Team Crazyhouse League building on the success of Season 4 and inspired by the ZH Summer League of 2017 organised by FischyVishy. While Season 4 was more of a trial with 4 teams of five players, Season 5 had 6 teams of seven players, led by TheFinnisher, xuanet, RapidVariants, VariantsOnly, Gene_Simmons and LegionDestroyer as the board 1 of each team. Team selection was done as in Season 4. Each week, players arranged two games of slow time control crazyhouse against the corresponding board of the opposing team. The time control played on board 1 was 5+5, on board 2 6+6, all the way up to board 7 playing 11+11. We have found this progression of times is favourable because weaker players appreciate the slower time controls (and we even saw some flags on board 7) while stronger players tend to be bored by anything slower. After three weeks of Swiss pairings, we discovered that there were two triangles of teams who needed to play each other, and since it isn’t possible to decompose the six edges of two triangles into two matchings, we needed an extra week so in each of the last three weeks of the season, two teams sat out and took a bye.

Team ZHorro were the champions with a commanding performance winning all of their five matches. Congratulations! Their team was made up of RapidVariants, CrazyHome, grogers, pkr5025, GodBless111, Isachess and darubaru (with Zher0 substituting in as alt for one round). TheIngloriousForkers led by TheFinnisher finished second with 3.5/5, while Cirque du So-Cray came third with 3/5. Top individual performers in the league were TheFinnisher from Finland living up to his number one seeding with 6/10, while CrazyHome from India was top board 2 with 8/10, pepellou the famous lichess streamer from Galicia in Spain was top board 3 with 7/10, pkr5025 was top board 4 with 8/10 and the biggest improver during the course of the league finishing the Season with a zh rating above 2100, charliehorse55 from Canada was top board 5 with 8/10, Isachess was top board 6 with a perfect 10/10, and jwwells42 was top board 7 also with 10/10. Special congratulations to Isachess and jwwells42 for being the players of the league in Season 5. For sure they will both be chosen on higher boards next season!

Huge thanks to colwem especially for keeping the programming of the zh league website working (although this site will go down once it is fully integrated into lichess4545.com) as well as to the other crazyhouse mods (FischyVishy, kostasvl & Zher0).

In total 184 games were played, and there are too many highlights to be able to share in a blog post (though these will certainly made into puzzle studies). So I will restrict myself here to a single game from Round 1 played on the 25th May, 2019 between RapidVariants and xuanet. I will share six positions from this game and under each image is one of the best variations: 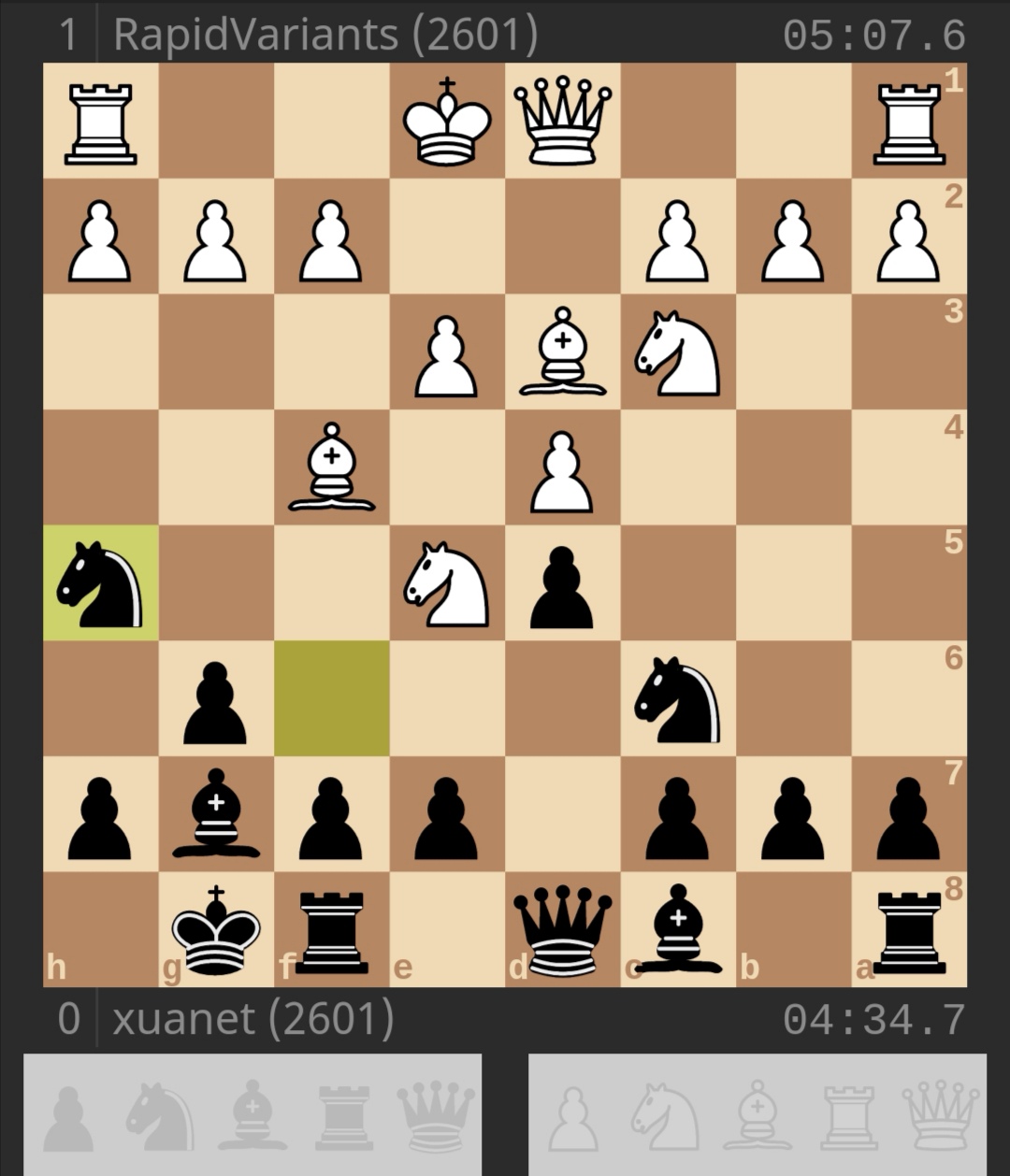 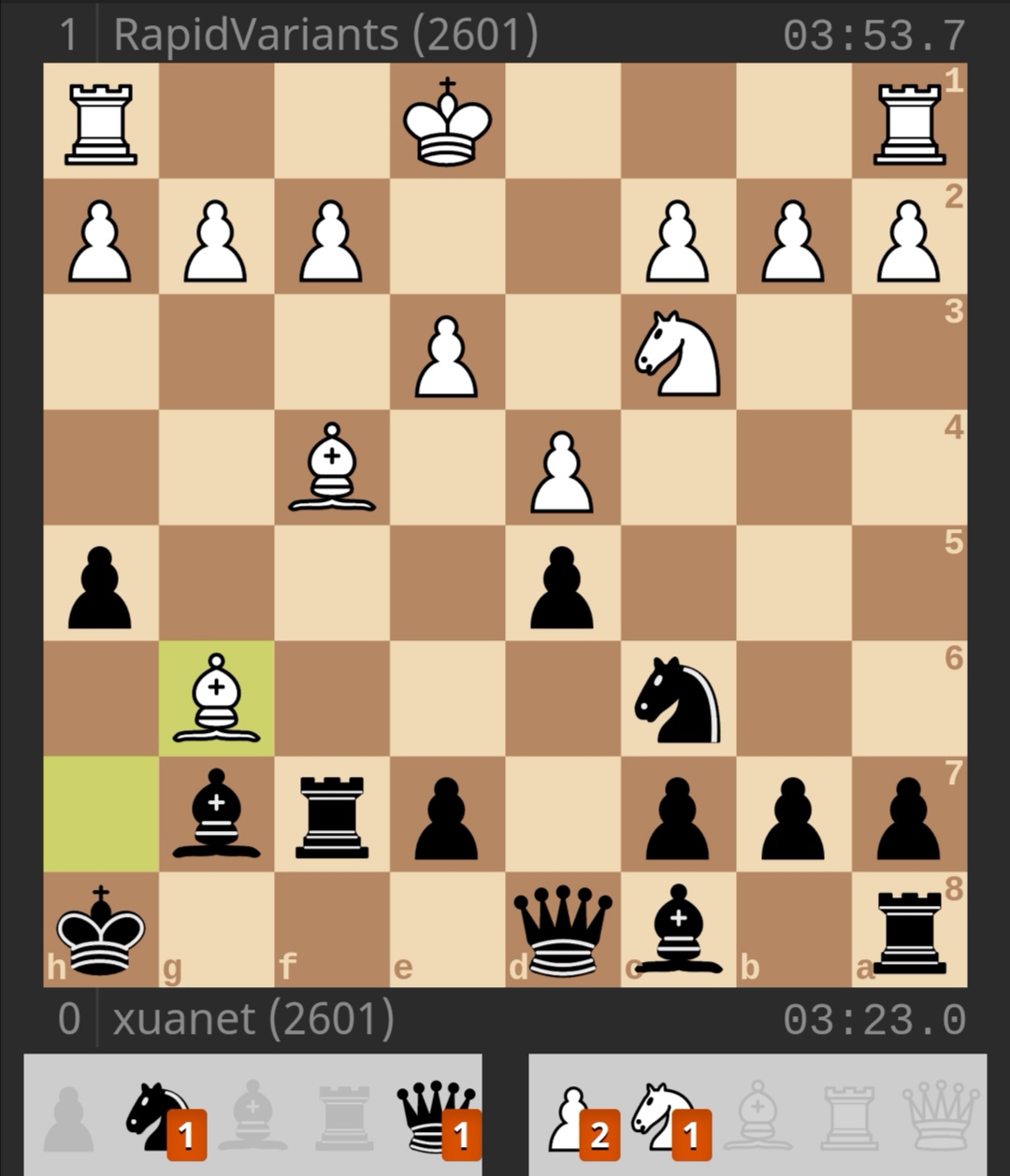 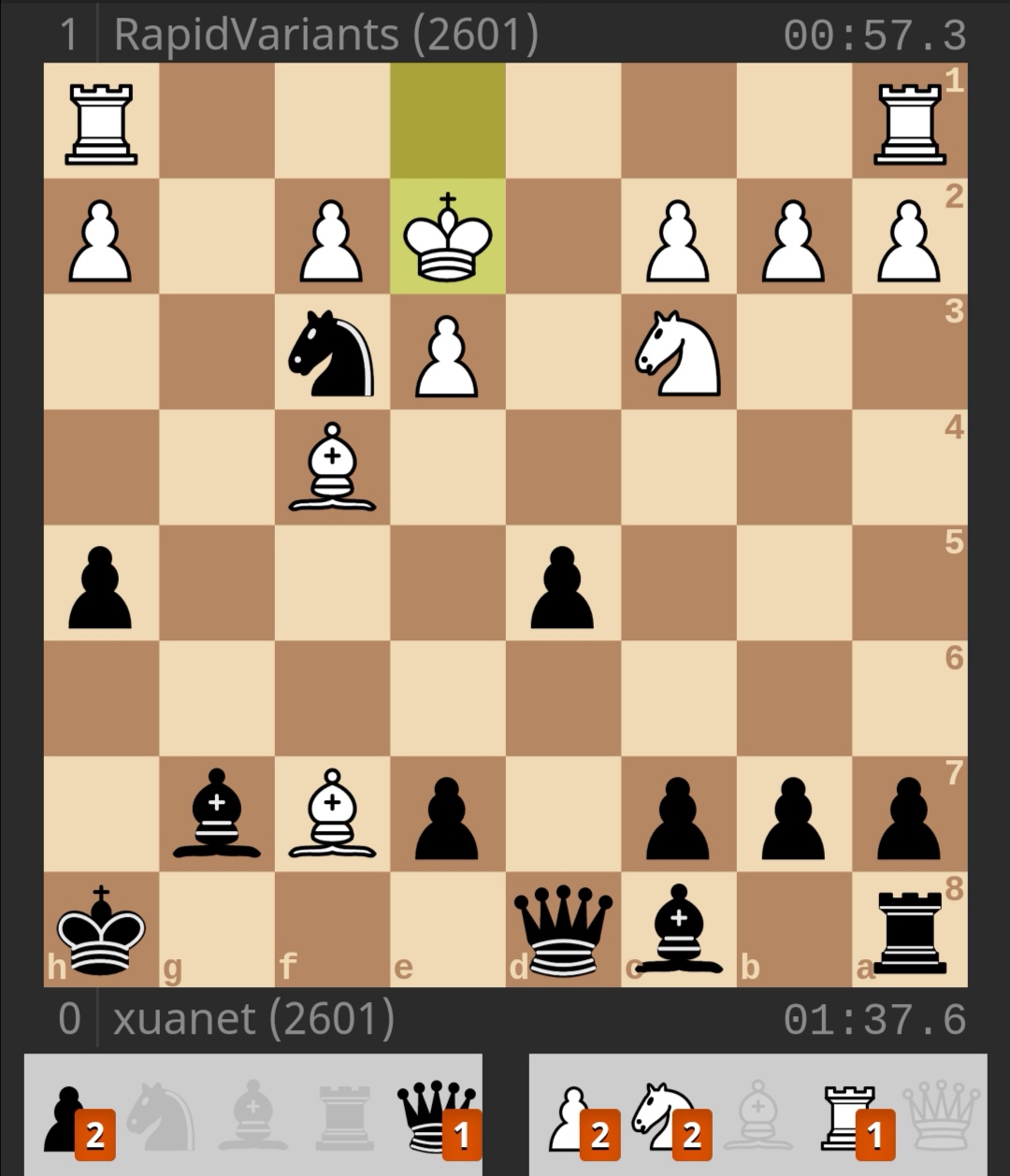 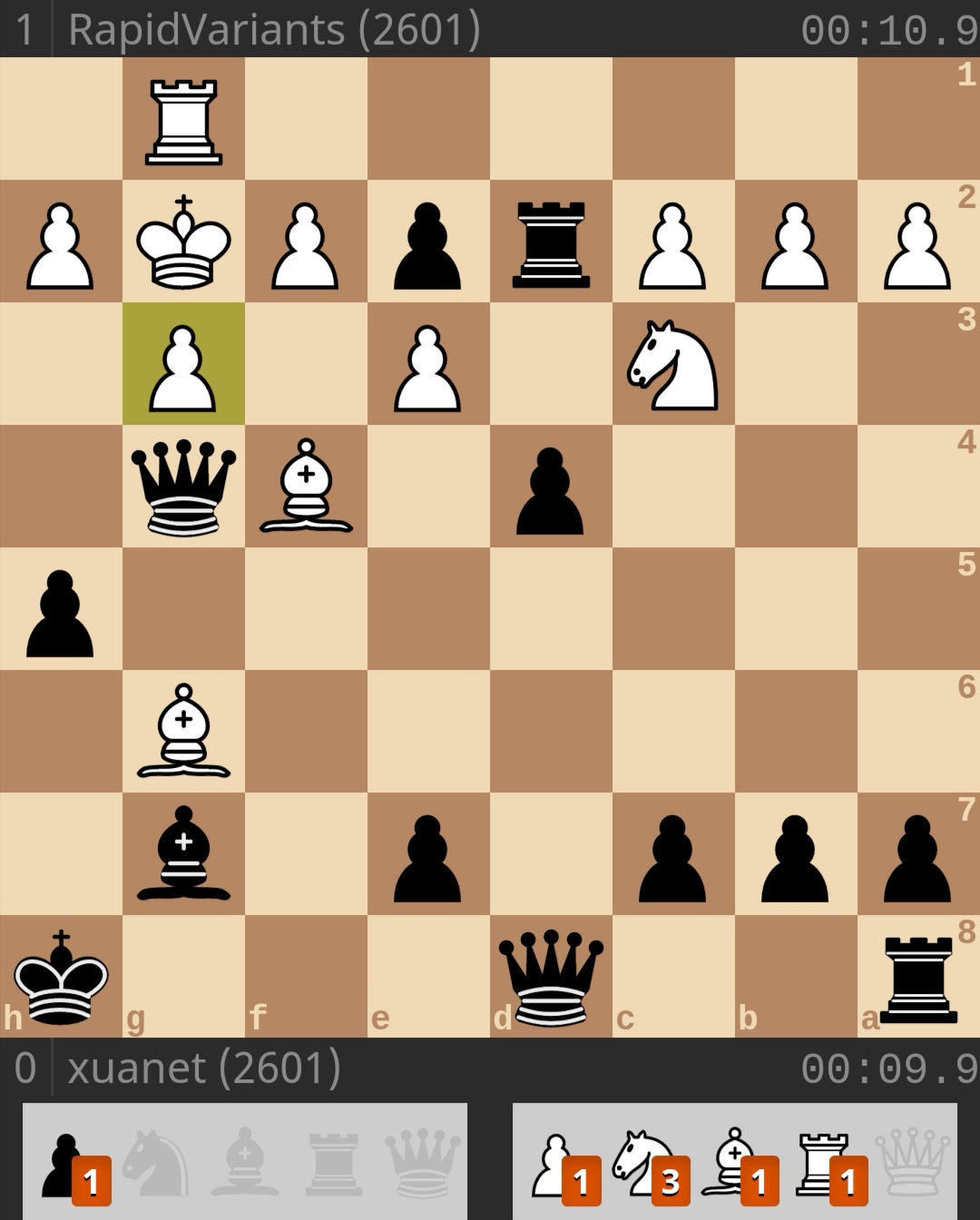 Also, what should White have played instead of @g3? 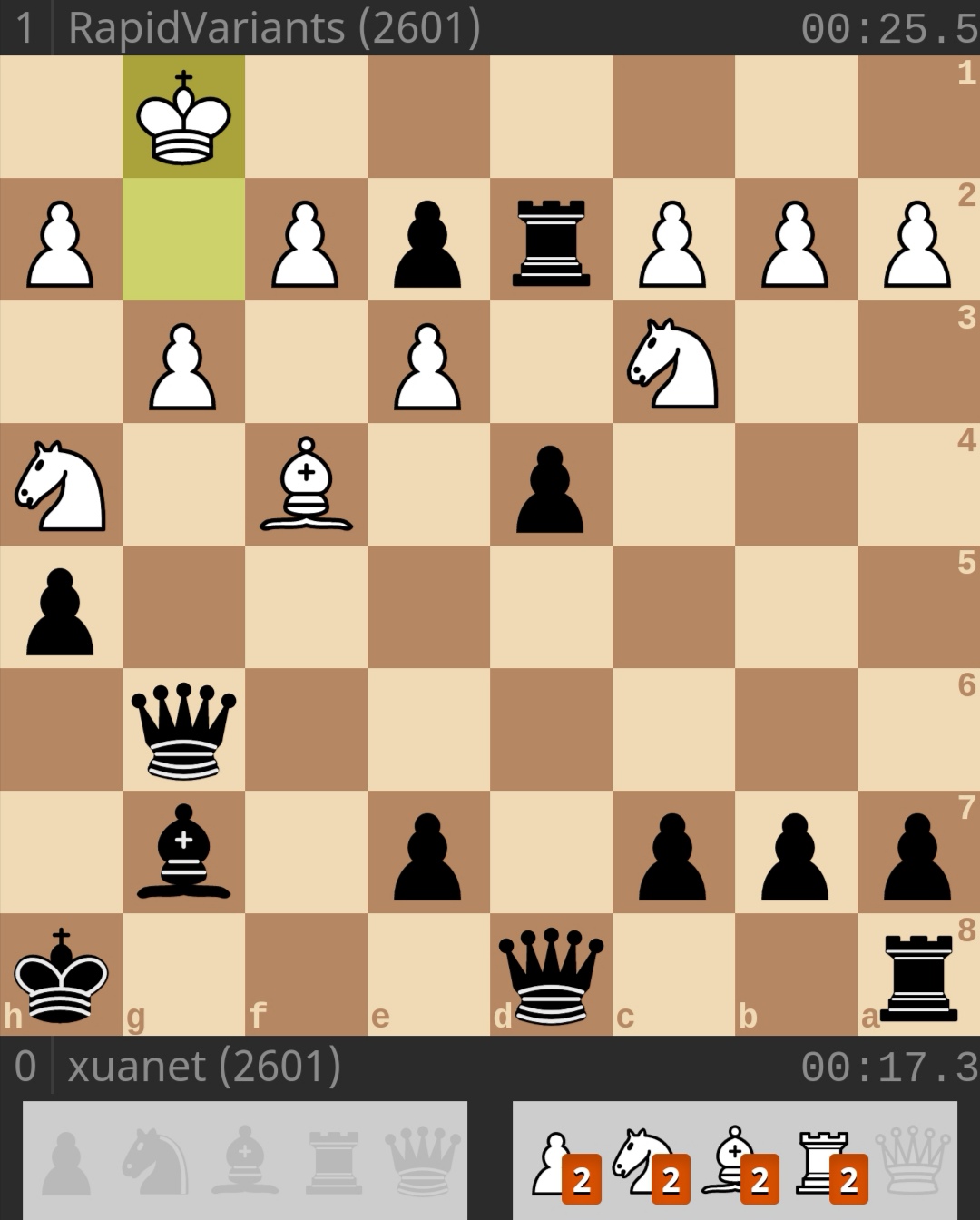 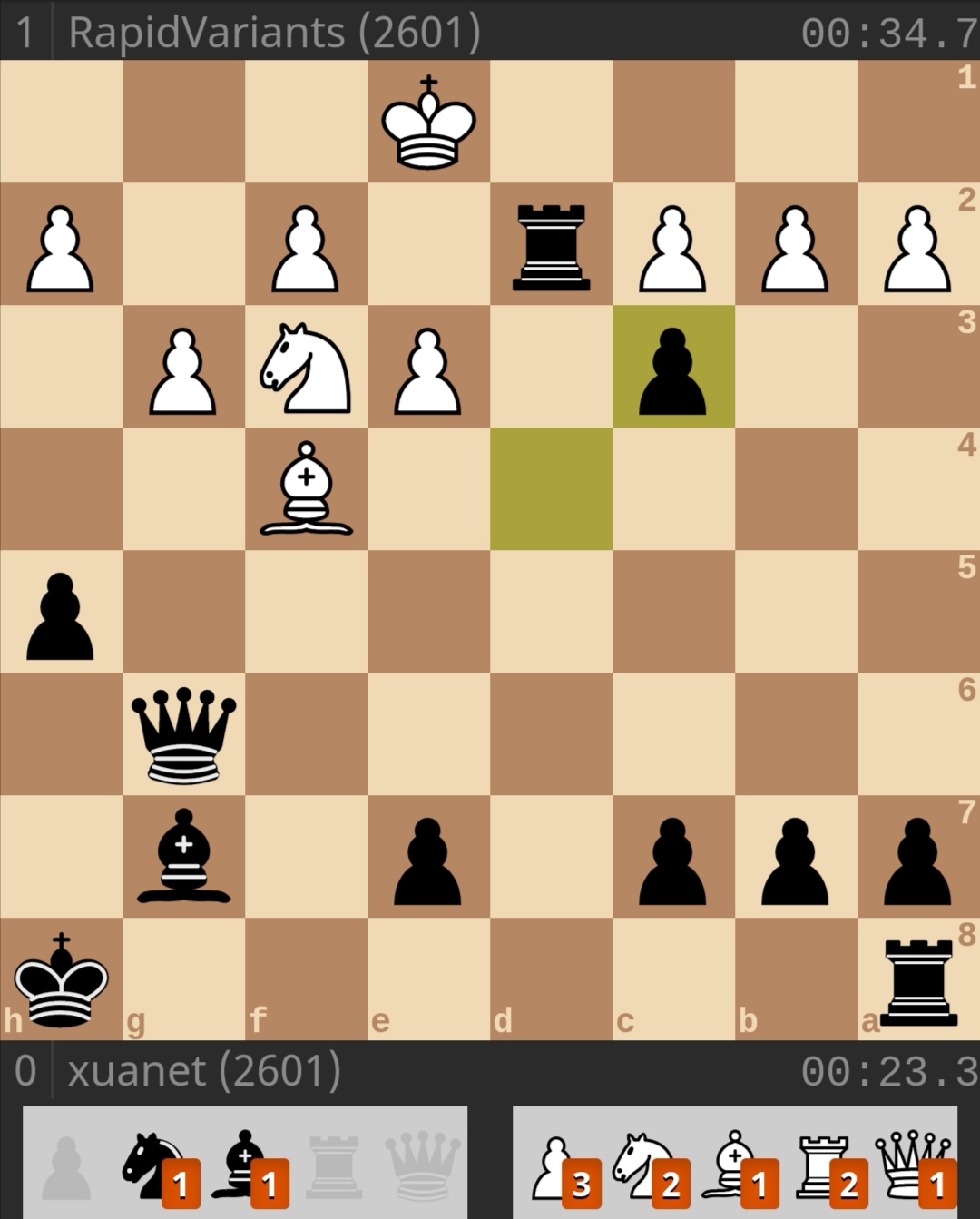 In position 6, the immediate N@f7 can in fact be made to work a move quicker, but it is not intuitively easy and also less aesthetically pleasing.

If you would like to practice 80 puzzles based on the games of Season 5, then check out the following links (puzzles 13027-13106), and keep adding one to the puzzle number to see the next puzzle:
https://chessvariants.training/Puzzle/13027
...
https://chessvariants.training/Puzzle/13106
There is a progression of difficulties and all puzzles are also tagged by theme. We will write about the definitions of these crazyhouse themes in a future blog, with the purpose being to help new players especially with their pattern recognition.

You can also watch these 80 puzzles live-streamed in a crazyhouse puzzle competition in this 2-part video series (the second video ending with a brief survey of three games from the league).


The big news in the past month is that JannLee’s daughter Bella has a baby brother and the JannLee plan is to form a team for the next generation of Australian bughouse. Congratulations to all the family! In the meantime, Kleerkast has been taking up the reins of elite crazyhouse streaming. So everyone should follow his Twitch to get notified when he streams, and subscribe to his YouTube!